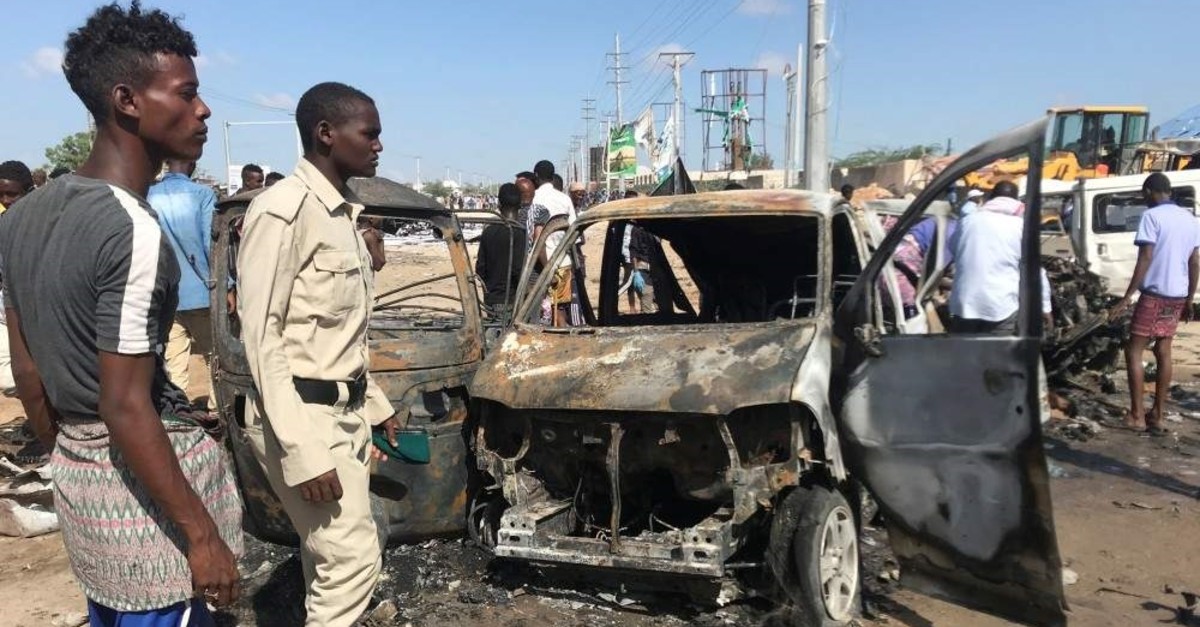 A car bomb exploded at a busy security checkpoint in Somalia's capital Saturday morning, killing nearly 80 people and injuring dozens of others.

It was one of the deadliest attacks in Mogadishu in recent memory, and witnesses said the force of the blast reminded them of the devastating 2017 bombing that killed hundreds.

The toll could rise as scores of people were rushed to hospitals, government spokesman Ismail Mukhtar told The Associated Press. Dr. Mohamed Yusuf, director of Madina hospital, said they had received 73 bodies. The Aamin Ambulance service reported at least 76 dead and more than 50 wounded.

Police Capt. Mohamed Hussein said the blast targeted a tax collection center during the morning rush hour as Somalia returned to work after its weekend. A large black plume of smoke rose above the capital.

Images showed the mangled frames of vehicles and bodies lying on the ground. At a hospital, families and friends picked through dozens of bodies.

“I saw many dead bodies lying on the ground," witness Mohamed Abdi Hakim said. “Some of those dead were police officers, but most of them were students."

Dozens of wounded were rushed to hospitals, including children and several university students who had been traveling in a nearby bus, Hussein said.

Most of those killed were university and other students returning to class, Mayor Omar Mohamud Mohamed said at the scene. Two Turkish brothers were among the dead, Somalia's foreign minister said.

Turkey's Ambassador to Somalia Mehmet Yılmaz confirmed that two Turkish nationals were among the victims of the attack. He said that some 80 people were killed and 120 others were injured in the blast, saying it is feared that the death toll would exceed 100 in remarks carried by the official Anadolu Agency (AA).

Some of the injured were brought to the Turkish-run Recep Tayyip Erdoğan Training and Research Hospital located in the capital, Yılmaz said, adding that 36 people wounded in the attack are currently under treatment and nine people were taken to surgery. He noted that the hospital's capacity is enough to care for all of the wounded.

The ambassador said the embassy is in close contact with Turkish and Somalian authorities, and an ambulance plane request from Somalia is being evaluated.

Foreign Minister Mevlüt Çavuşoğlu offered his condolences to the two Turkish nationals and other Somalian victims of the "treacherous terror attack."

"We will always stand next to our brother nation Somalia. Our fight against terror will resume with determination," Çavuşoğlu wrote on Twitter.

Presidential Communications Director Fahrettin Altun also condemned the attack, adding that Turkey stands with Somalia in the fight against terrorism.

There was no immediate claim of responsibility. The al-Qaida-linked al-Shabab often carries out such attacks. The extremist group was pushed out of Mogadishu several years ago but continues to target high-profile areas such as checkpoints and hotels in the seaside city.

The extremist group is now able to make its own explosives, its “weapon of choice,” United Nations experts monitoring sanctions on Somalia said earlier this year. The group had previously relied on military-grade explosives captured during assaults on an African Union peacekeeping force.

Al-Shabab was blamed for the truck bombing in Mogadishu in October 2017 that killed more than 500 people. The group never claimed responsibility for the blast that led to widespread public outrage. Some analysts said al-Shabab didn't dare claim credit as its strategy of trying to sway public opinion by exposing government weakness had badly backfired.

“This explosion is similar like the one... in 2017. This one occurred just a few steps away from where I am and it knocked me on the ground from its force. I have never seen such a explosion in my entire life," said witness Abdurrahman Yusuf.

The latest attack again raises concern about the readiness of Somali forces to take over responsibility for the Horn of Africa country's security in the coming months from the AU force.

Al-Shabab, the target of a growing number of U.S. airstrikes since President Donald Trump took office, controls parts of Somalia's southern and central regions. It funds itself with a “taxation” system that experts describe as extortion of businesses and travelers that brings in millions of dollars a year.