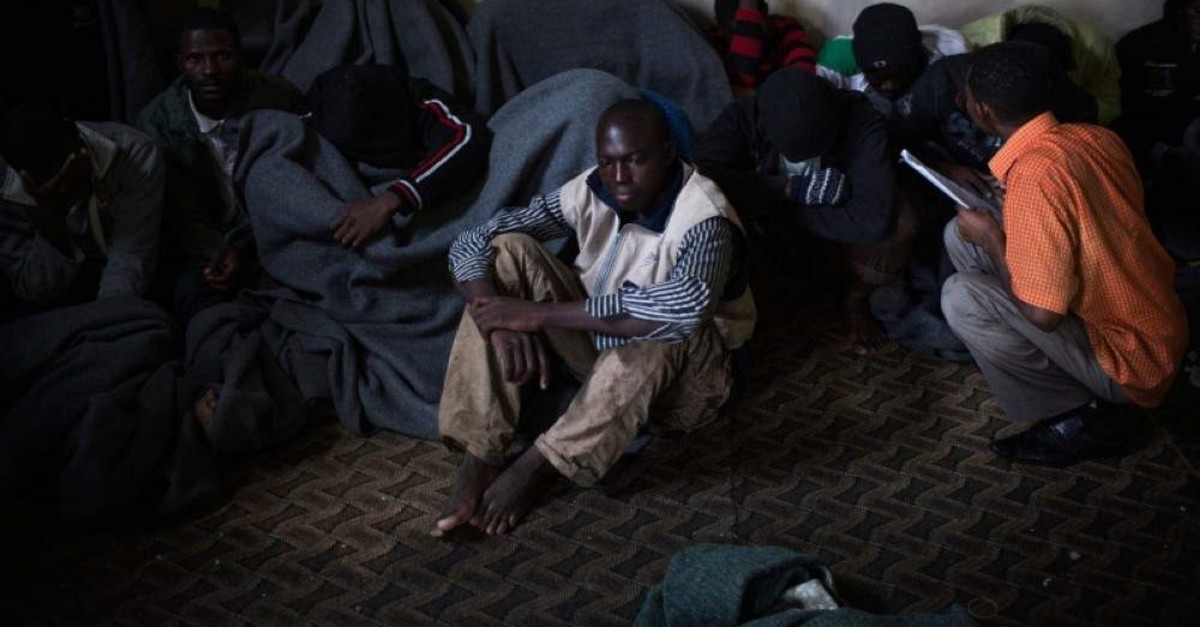 Migrants cover themselves with blankets in a detention center in the Abu Salim district on the outskirts of Tripoli, Libya. (AP Photo)
by Associated Press Dec 31, 2019 4:07 pm

When the European Union started funneling millions of euros into Libya to slow the tide of migrants crossing the Mediterranean, the money came with EU promises to improve detention centers notorious for abuse and fight human trafficking.

That hasn't happened. Instead, the misery of migrants in Libya has spawned a thriving and highly lucrative web of businesses funded in part by the EU and enabled by the United Nations, an Associated Press investigation has found.

The EU has sent more than 327.9 million euros to Libya, with an additional 41 million approved in early December, largely funneled through U.N. agencies. The AP found that in a country without a functioning government, huge sums of European money have been diverted to intertwined networks of militiamen, traffickers and coast guard members who exploit migrants. In some cases, U.N. officials knew militia networks were getting the money, according to internal emails.

The militias torture, extort and otherwise abuse migrants for ransoms in detention centers under the nose of the U.N., often in compounds that receive millions in European money, the AP investigation showed. Many migrants also simply disappear from detention centers, sold to traffickers or to other centers.

The same militias conspire with some members of Libyan coast guard units. The coast guard gets training and equipment from Europe to keep migrants away from its shores. But coast guard members return some migrants to the detention centers under deals with militias, the AP found, and receive bribes to let others pass en route to Europe.

The militias involved in abuse and trafficking also skim off European funds given through the U.N. to feed and otherwise help migrants, who go hungry. For example, millions of euros in U.N. food contracts were under negotiation with a company controlled by a militia leader, even as other U.N. teams raised alarms about starvation in his detention center, according to emails obtained by the AP and interviews with at least a half-dozen Libyan officials.

In many cases, the money goes to neighboring Tunisia to be laundered and then flows back to the militias in Libya.

EU and UN are aware of the situation

The EU's own documents show it was aware of the dangers of effectively outsourcing its migration crisis to Libya. Budget documents from as early as 2017 for a 90 million euro outlay warned of a medium-to-high risk that Europe's support would lead to more human rights violations against migrants and that the Libyan government would deny access to detention centers. A recent EU assessment found the world was likely to get the "wrong perception" that European money could be seen as supporting abuse.

Despite the roles they play in the detention system in Libya, both the EU and the U.N. say they want the centers closed. In a statement to the AP, the EU said that under international law, it is not responsible for what goes on inside the centers.

The EU also says more than half of the money in its fund for Africa is used to help and protect migrants, and that it relies on the U.N. to spend the money wisely.

The U.N. said the situation in Libya is highly complex, and it has to work with whoever runs the detention centers to preserve access to vulnerable migrants.

"UNHCR does not choose its counterparts," said Charlie Yaxley, a spokesman for the U.N. refugee agency. "Some presumably also have allegiances with local militias."

After two weeks of being questioned by the AP, UNHCR said it would change its policy on awarding of food and aid contracts for migrants through intermediaries.

"Due in part to the escalating conflict in Tripoli and the possible risk to the integrity of UNHCR's program, UNHCR decided to contract directly for these services from Jan. 1, 2020," Yaxley said.

Julien Raickman, who until recently was the Libya mission chief for the aid group Médecins Sans Frontières, also known as Doctors Without Borders, believes the problem starts with Europe's unwillingness to deal with the politics of migration.

"If you were to treat dogs in Europe the way these people are treated, it would be considered a societal problem," he said.