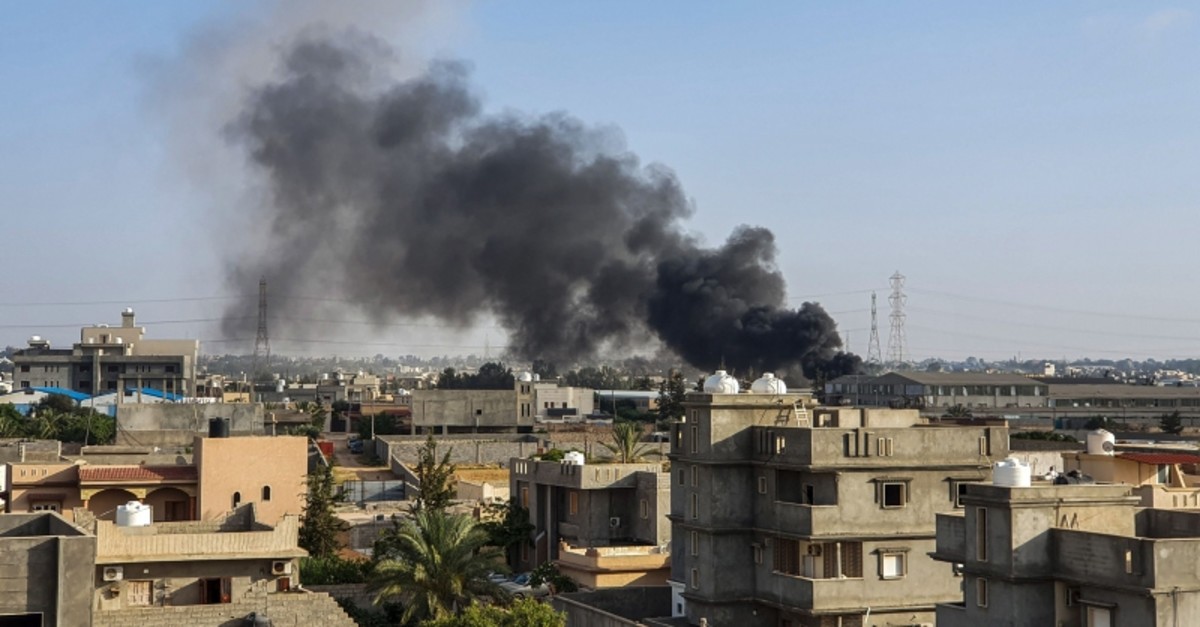 Sounds of explosions were heard in the capital Tripoli after the Berlin summit, which was held with the aim of establishing a lasting cease-fire and initiating a political process in Libya.

Abdul-Malik Al-Madani, spokesman for the Burkan Al-Ghadab (Volcano of Rage) Operation by Libya's U.N.-recognized government, told Anadolu Agency that the militias violated the cease-fire by launching a random mortar attack on the Salah al-Din region south of Tripoli.

While warring parties in Libya and the international community gathered in Berlin, Haftar's forces also launched mortar attacks on Al Halatat during the day.

Periodic gunfire was heard south of the Libyan capital and black smoke could be seen rising.

Earlier on the same day, participants of the Berlin conference on the crisis in Libya agreed to uphold a U.N. arms embargo and end military support for warring factions.

"First, we must have a cease-fire. All parties today committed to supporting the cease-fire," U.N. Secretary-General Antonio Guterres said.

He also said at the news conference that there can be no military solution in Libya, adding that all parties pledged not to intervene militarily in the country.

"We must have monitoring," he continued, stressing that the monitoring should involve several international organizations and must be accepted by the factions in the conflict.

He said a military committee of delegates from putschist Gen. Khalifa Haftar's forces and the U.N.-recognized Government of National Accord (GNA) would convene in Geneva in the next few days to continue negotiations.

Merkel clarified that Haftar and GNA Prime Minister Fayez al-Sarraj were not in the same room during the talks in Berlin, but were spoken to separately. They did not directly participate in the conference, she said.

More than 280 civilians and 2,000 fighters have been killed since the beginning of putschist Gen. Haftar's assault on Tripoli, according to the United Nations. The fighting has displaced some 146,000 people, with the ongoing violence threatening to plunge Libya into violent chaos to rival the 2011 conflict that led to the ousting and murder of longtime dictator Moammar Gadhafi.

Ankara is joined by Italy and Qatar in supporting Prime Minister Sarraj's legitimate government in Tripoli. Meanwhile, the rival force based in the east is supported by France, Russia, Jordan and the United Arab Emirates, alongside other key Arab countries.

Since the ousting of late leader Gadhafi in 2011, two seats of power have emerged in Libya – Haftar in eastern Libya supported mainly by Egypt and the United Arab Emirates, and the GNA in the capital Tripoli, which enjoys U.N. and international recognition