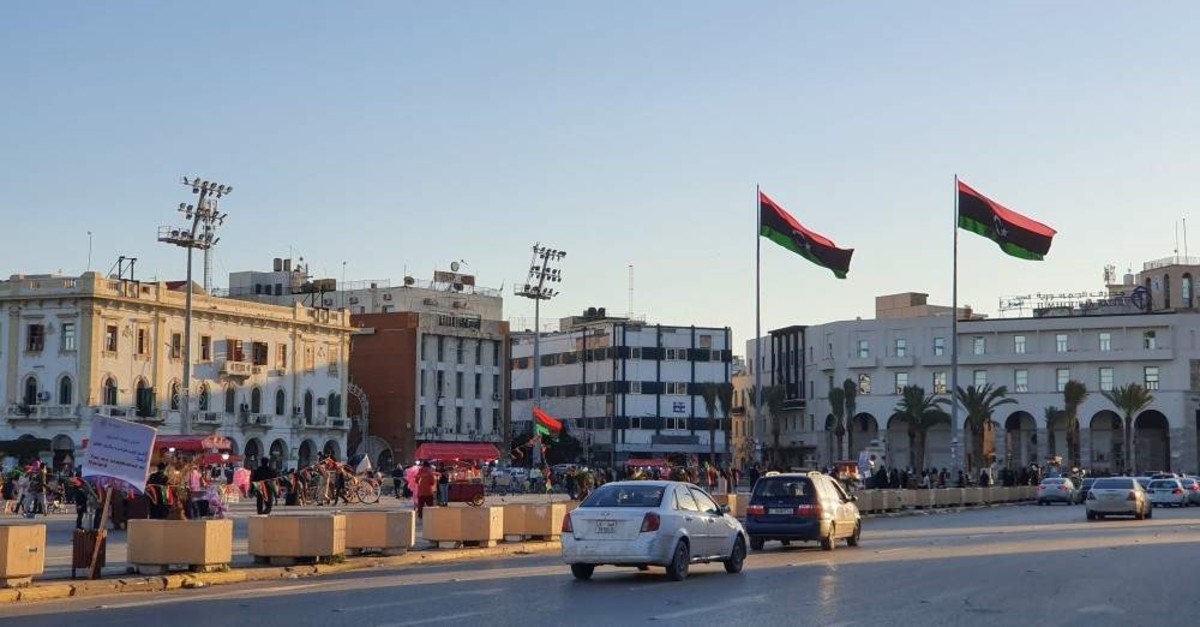 A peaceful solution to Libya's protracted conflict remains uncertain despite ongoing diplomatic efforts, as local people in the capital Tripoli expect the war to end and stability to be established, Jan. 20, 2020. (AFP Photo)
by Eralp Yarar Jan 23, 2020 8:46 pm

Concerned about the protracted violence threatening to plunge Libya into chaos, people in the capital Tripoli criticize international actors' recognition of Haftar as a legitimate political actor

Local people in Libya's capital Tripoli are disturbed that putschist Gen. Khalifa Haftar is treated as a legitimate actor by international powers and invited as a political representative of the Libyan people to diplomatic talks.

"For example, there was an attack on a military school in early January. Many civilians lost their lives. Such incidents are not forgotten by people. Local people are angry because the one who did all this is treated as a legitimate actor in international conferences," he explained.

Earlier this month, at least 30 people were killed and 33 others wounded in an attack carried out by forces loyal to Haftar on a military academy in the Libyan capital. Turkey condemned the attack and called for international steps to achieve a cease-fire.

Since the ouster of late ruler Moammar Gadhafi in 2011, two seats of power have emerged in Libya: Haftar in eastern Libya, supported mainly by Egypt and the United Arab Emirates, and the Government of National (GNA) in Tripoli, which enjoys U.N. and international recognition.

More than 280 civilians and 2,000 fighters have been killed since the beginning of Haftar's assault on Tripoli, according to the U.N. The fighting has displaced some 146,000 people, with the ongoing violence threatening to plunge Libya into violent chaos to rival the 2011 conflict that led to the ousting and murder of longtime dictator Gadhafi.

One main point that Canlı mentioned was Haftar's untrustworthy attitudes that have sabotaged diplomatic initiatives on Libya. As a recent example, Haftar left Moscow peace talks without signing the permanent cease-fire deal drafted on initial talks despite earlier expressing his intention to sign it. The warring parties in Libya had announced the cease-fire on Jan. 12 in response to a joint call by the leaders of Turkey and Russia.

Another example Canlı cited Haftar's launch of his military campaign in April when Libyan rival sides were preparing for a political solution, underlining the U.N. officials' confusion about such a move ahead of planned diplomatic initiatives.

"Haftar's behavior displays a sense of a superiority complex," Canlı said, adding that Haftar sees himself as a state leader and wants to deal with his "counterparts."

It had been reported that one reason Haftar left Moscow was that he was expecting a welcoming ceremony with a red carpet at the Kremlin when he arrived for the peace talks. Instead, he was cooped up in a Russian Foreign Ministry reception building hoping for an audience with the Russian president. In addition, the drafted deal reportedly did not meet Haftar's expectations. After all these developments, the putschist general lost his temper and stormed out of Moscow without signing the deal.

"Regional actors supporting Haftar, such as Egypt and the UAE, are satisfied with Haftar's attitude and continue to support him," Canlı remarked.

"They do not generally believe that international diplomatic initiatives can bring a solution to the Libyan crisis. They say that problems in Libya should be solved among Libyans without the involvement of external actors," Canlı said.

In a recent development in the conflict-ravaged country, the capital's only operational airport suspended flights late Wednesday after forces loyal to Haftar declared Tripoli and surrounding areas a "no-fly zone" and threatened to down any aircraft, including civilian commercial passenger flights, dealing another setback to peace efforts.

The Mitiga International Airport's administration announced on its Facebook page that flights have been suspended until further notice and were being directed to Misrata Airport.

Evaluating the latest situation in the capital, Canlı said: "There was a calm environment following the announcement of cease-fire on Jan. 12. Since the Berlin conference on Sunday, some clashes and explosions have been heard again. Compared to the period before Jan. 12, this is a relatively controlled tension. All these have become a daily routine for local people. They are tired and only want the war to end."

Ahmed al-Mismari, the spokesman for Haftar's forces, said on social media that the forces declared off-limit an area from Giryan, 120 kilometers south of the capital city, to Terhune city, 90 kilometers southeast and to Tripoli beach, including Mitiga Airport.

He said all planes in the declared area would be "legitimate" targets. The militias bombed Mitiga Airport with six Grad missiles earlier Wednesday.

The airport has been hit multiple times since the start of a monthslong offensive by militias led by eastern-based Haftar to seize Tripoli from the U.N.-recognized GNA.

GNA forces' spokesman Mohammed Gnunu branded the strikes a "flagrant threat" to the safety of air traffic and a "new violation" of the most recent cease-fire.