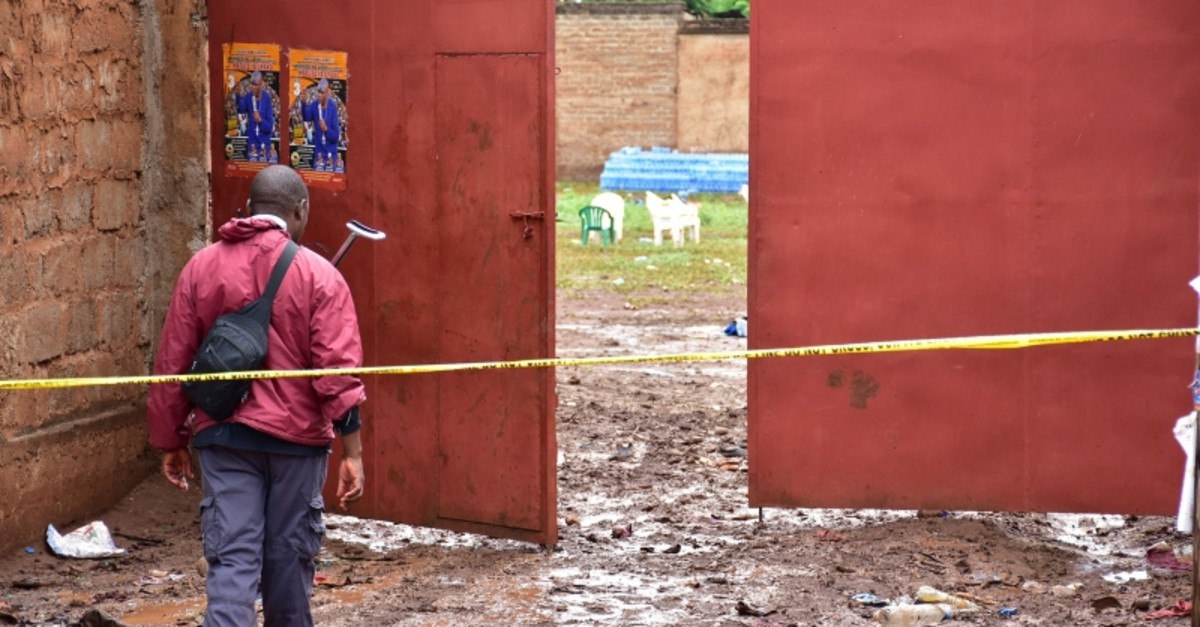 A plain police protects the main gate of Majengo ground township of Moshi in Kilimanjaro region, north Tanzania, on February 2, 2020 after 20 people were killed and and 16 injured in stampede yesterday evening at Majengo open ground (AFP Photo)
by Compiled from Wire Services Feb 02, 2020 12:36 pm

At least 20 people in Tanzania were trampled to death at an open-air evangelical Christian church service in the north of the country, officials said Sunday.

Hundreds of people packed a stadium on Saturday evening in the town of Moshi, near the slopes of Mount Kilimanjaro, and crushed each other as they rushed to get anointed with "blessed oil."

Moshi District Commissioner Kippi Warioba said he feared the number of dead could still rise from the accident, which took place on Saturday afternoon.

"So far, 20 people have died, but the death toll could increase as there were also wounded," Warioba told AFP. Five of those killed were children, he said. At least 16 others were injured.

The tragedy happened when a crowd of worshippers was attending a prayer ceremony on Saturday led by the popular preacher, Boniface Mwamposa, who heads the Arise and Shine Ministry Tanzania.

The stampede occurred when Mwamposa, who calls himself the "Apostle," poured what he said was holy oil on the ground and the crowd surged toward to touch it in the hope of being cured of sickness, witnesses said.

"Dozens of people immediately fell being jostled and trampled, and some died. We have counted 20 people killed – but there are also wounded."

"It was horrible, people trampled on mercilessly, jostling each other with elbows," said another witness, Peter Kilewo.

"It was like the preacher had thrown bundles of dollars about ... and there were all these deaths!"

Mwamposa, the preacher, fled the scene after the stampede.

Tanzanian police chief Simon Sirro, who confirmed the toll of 20 dead, spoke on national television on Sunday morning in an appeal to Mwamposa to hand himself in for questioning.

"We are looking for him," Sirro said, on the state-run TBC1 television channel.

"Police have launched investigations into the matter and Mwamposa should immediately report to police. He is famous, there is no way he can escape," Sirro added.

He said police would also look into how church organizations handle such large-scale crowd events in general.

"We pray for them, but I must say that some churches are troublesome – and we will see how to handle them," Sirro added.

Tanzania has seen a rise in the number of "prosperity gospel" pastors in recent years, who promise to lift people out of poverty and perform what they call miracle cures. Thousands of people in the nation of 55 million flock to Pentecostal churches, whose main source of income is "tithe," the 10% or so of income that worshippers are asked to contribute.