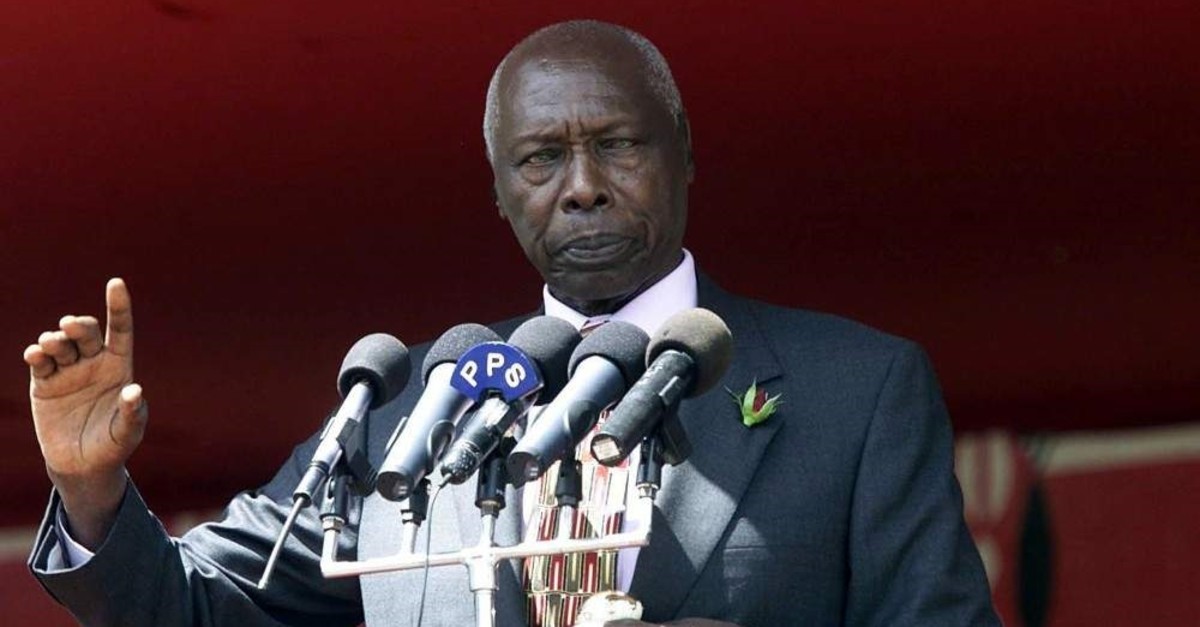 In this Saturday, June 29, 2002 file photo, Kenyan President Daniel Arap Moi addresses a crowd of supporters, during a political rally by the ruling KANU party in the capital Nairobi, Kenya. (AP File Photo)
by Compiled from Wire Services Feb 04, 2020 9:14 am

"It is with profound sadness and sorrow that I announce the passing of a great African statesman, H.E. Daniel Toroitich Arap Moi, the second president of the Republic of Kenya. His Excellency the former president passed on at the Nairobi Hospital on the early morning of this 4th February 2020 in the presence of his family,” Kenyan leader Uhuru Kenyatta said in a presidential proclamation. He said Moi, Kenya's second president, was a leader in the struggle for Kenya’s independence and an ardent Pan-Africanist.

Moi had been in and out of the hospital, where he was put on life support machines following recurring medical complications that were tied to his age.

Born on Sept. 2, 1924, in Kabarak village in Kenya’s Great Rift Valley, he was the second president of the Republic of Kenya and rose all the way from being a cattle herder to a teacher and finally becoming the country’s leader.

In 2002, the long-serving president, who has left behind seven children, decided not to run again in Kenyan elections, completely exiting and retiring from politics.

Since officially joining politics in 1955, Moi served as an educator, a teacher, a legislator, a member of parliament, a cabinet minister, vice president and finally as president of the Republic of Kenya.

Moi was praised for keeping Kenya a relative haven of peace during a chaotic period in east Africa which saw the genocide in Rwanda and civil wars in Burundi and Somalia.

In his statement, Kenyatta ordered and directed that "in the testimony of the respect in which the memory of the Late Daniel Toroitich Arap Moi is held, the nation will observe a period of national mourning from today until the day of his funeral” on a date not yet announced.

Kenyatta added that Moi shall be accorded a state funeral with all appropriate civilian and full military honors being rendered and observed.

Further, Kenya has ordered that the flag of the Republic of Kenya shall be flown at half-mast at the State House, state lodges, all public buildings and public grounds, all military bases, posts and stations, on all naval vessels of the Republic of Kenya and elsewhere throughout the country from dawn on Feb. 4 until sunset on the day of his burial.

Kenyatta directed that the Kenyan national flag shall be flown at half-mast for the same length of time at all high commissions, embassies, consulates, diplomatic offices and other facilities of Kenya abroad.