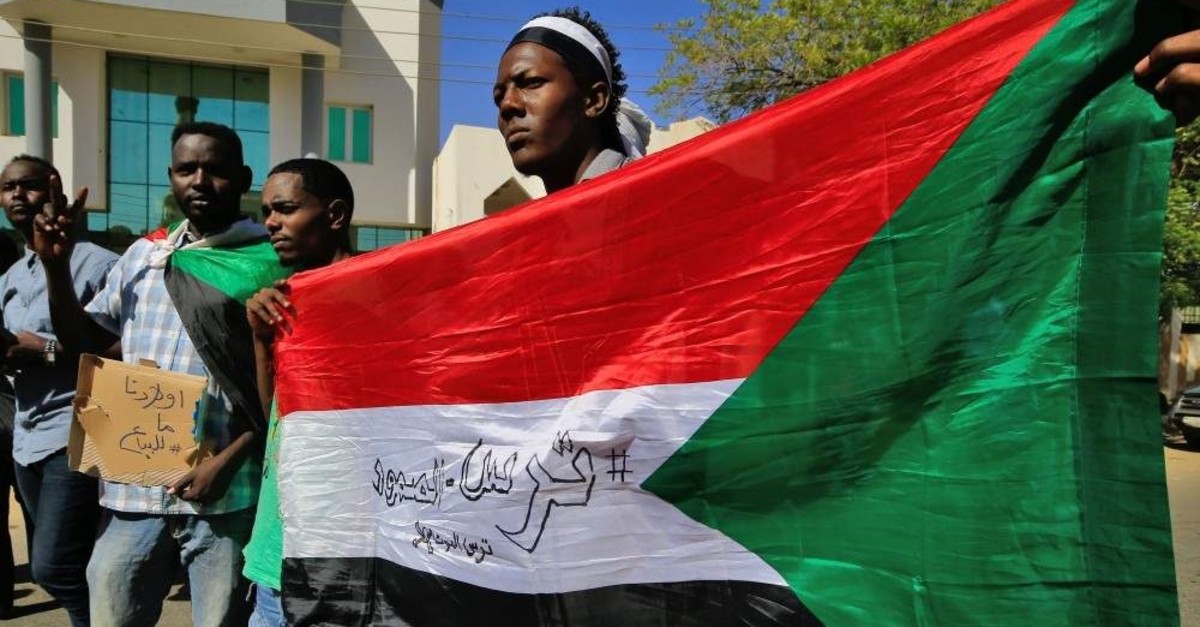 Sudanese demonstrators carry placards and wave their country's national flag as they gather to protest outside the Foreign Ministry, Khartoum, Jan. 28, 2020. (AFP Photo)
by Daily Sabah with AFP Feb 04, 2020 7:21 pm

Young people from Sudan tricked by an Emirati security firm into guarding oil facilities under the control of the putschist Gen. Khalifa Haftar returned to their country and are now demanding $30,000 in compensation from the United Arab Emirates-based company, according to Turkish daily Hürriyet Daily News.

According to reports, hundreds of young people had been given UAE visas by travel agencies following advertisements in local newspapers for Sudanese men to work as security guards for a UAE firm called Black Shield. These young people, seeking jobs abroad to earn money due to poverty in Sudan, were first taken to the UAE for a monthly salary of $500. Here, the young people were trained in military camps located in the desert, without being told that they would be sent to war zones in Libya. Then, they were transferred to Ras Lanuf oil terminal in Libya to protect Benghazi and its surrounding oil fields. They claimed they were not given a choice to work in the UAE or Libya, and some of them found themselves in Benghazi, Libya, even though they were told that they were in the eastern part of the Emirati kingdom.

The Black Shield company made an offer to the Sudanese youth to work in the UAE to cover up the scandal; however, they rejected the offer. Local sources stated that young Sudanese are planning to make a collective statement about the tragedy after the return of all the young men.

Since last week, Sudanese families have been protesting the deceptive UAE recruitment while urging the Sudanese government to take concrete action. Activists called the government's response weak, noting a statement was only made because of increasing public pressure on the matter.

The UAE is Haftar's most important supporter in a conflict that has increasingly become a proxy war. The UAE has also been a prominent player in Sudan, where it has close ties to top military officials who toppled former President Omar al-Bashir last year after months of street protests. Sudan sent troops to fight in the Saudi-led coalition in Yemen, in which the UAE also participated, though Sudan's transitional government, which is sharing power with the military, has said it is reducing its presence there.

Foreign fighters and guards, including many from Sudan, have been used in Libya and Yemen many times. A U.N. report on Sudan released this month also said many Arabs from the conflict-wracked region of Darfur were fighting as "individual mercenaries" alongside warring Libyan parties.