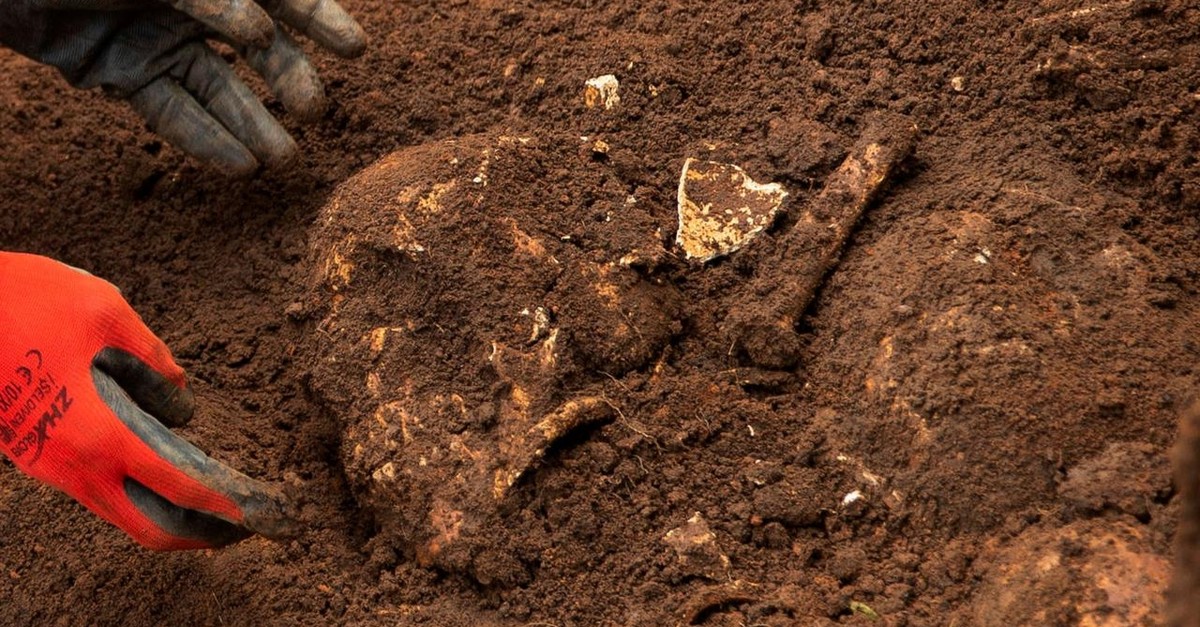 A Burundian worker from the Truth and Reconciliation Commission extracts the skull of an unidentified person from a mass grave in the Bukirasazi hill in Karusi Province, Burundi, Jan. 27, 2020. (Reuters Photo)
by Compiled from Wire Services Feb 16, 2020 7:21 pm

Burundi’s Truth and Reconciliation Commission has found more than 6,000 bodies in six mass graves in Karusi Province, the largest finding since the government launched a nationwide excavation in January.

The commission chairman Pierre Claver Ndayicariye told journalists on Friday that the remains of the victims, as well as thousands of bullets, were recovered. Clothes, glasses and rosaries were used to identify some of the victims.

"During the first phase of the excavation work near the Ruvubu bridge, in Karusi province, remains of 6,032 victims were exhumed. These victims were mostly of the same ethnic group and others perished as a result of interpersonal conflicts or settlements,” local media quoted Ndayicariye. He said the remains were placed in a secure location in the capital of Gitega province, pending a befitting reburial.

The tiny East African nation is struggling to come to terms with a violent past, characterized by suffered colonial occupation, civil war and decades of intermittent massacres.

The remains are mostly victims of a 1972 massacre which reportedly targeted the Hutu ethnic group, according to Ndayicariye.

Referring to a massacre that is believed to have targeted people from the Hutu ethnic group, Ndayicariye said families of the victims were able to "break the silence" that was imposed 48 years ago.

Burundi’s population is divided between the Tutsi and Hutu ethnic groups. The civil war – which killed 300,000 people before it ended in 2005 – had ethnic overtones.

The government-run commission was set up in 2014 to investigate atrocities from 1885, when foreigners arrived in Burundi, until 2008 when a stalled peace deal to end the civil war was fully implemented.

So far it has mapped over 4,000 mass graves across the country and identified more than 142,000 victims of violence.

Its mandate does not cover most of the rule of the current president, Pierre Nkurunziza, who took office in 2005.

The U.N. has warned that human rights abuses might increase again ahead of May 2020 elections.

Since 2015, when Nkurunziza ran for a third, disputed term in office, hundreds of Burundians have been killed in clashes with security forces.