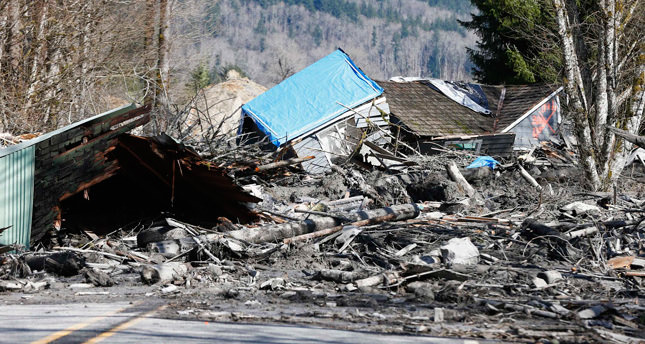 by French Press Agency - AFP Mar 24, 2014 12:00 am
SAN FRANCISCO — At least eight people were killed and up to 18 were believed missing when a massive landslide slammed "like a freight train" into a mountainside community in the northwestern United States, officials said late Sunday.

The wall of mud, rocks and trees smashed into the rural town of Oso, northeast of Seattle, on Saturday, destroying houses and part of a highway.

Travis Hots, chief of the regional Snohomish County Fire districts, announced at an area community meeting late on Sunday that the death toll had risen to eight.

"I'm saddened to inform you that we have assured four additional fatalities" to the four deaths confirmed earlier, Hots told reporters.
The field of rubble is about 2.4 kilometes (1.5 miles) across and some four to six (15-20 feet) deep in areas, The Seattle Times reported.

Rescuers reported hearing voices calling for help on Saturday, but Hots told reporters that they "didn't see or hear any signs of life" on Sunday.

Snohomish County spokeswoman Shari Ireton told AFP: "We are able to confirm we know that 18 people who may have been in the area are unaccounted for. We do not have identification for those people that we are releasing at this time."

Later at the televised press conference, Hots would only say that the number of missing people was "fluid."

Among the missing was a 4-month-old baby and her grandmother, local media reported.

"Resources are coming in that allow us to conduct night operations," Pennington said at the briefing. "There are boots that are on the ground that are really working to continue operations 24/7."

Six homes and much of a two-lane highway in the area were destroyed, while as many as 16 other homes were damaged, the Snohomish County Sheriff's Office said.

Washington state Governor Jay Inslee, who declared a state of emergency for the area, told reporters there is "a full-scale, 100-percent, aggressive rescue effort" going on, adding that helicopters, hovercrafts and rescue personnel had rushed to the scene.

The muddy area was so unstable that some rescue workers "went in and got caught literally up to their armpits" and had to be pulled out themselves, Inslee said.

People injured in the landslide include a six-month old infant and an 81 year-old man, both hospitalized in critical condition at a Seattle hospital, local media said.

"It sounded like a freight train," landslide witness Dan Young told Komo4News. "In just 35 to 45 seconds it was over." Young's home survived but is flooded.

"It's much worse than everyone's been saying," a firefighter who did not want to be named told The Seattle Times. "The slide is about a mile wide. Entire neighborhoods are just gone. When the slide hit the (Stillaguamish) river, it was like a tsunami."

Rain has been especially heavy in the Cascade Mountains region in the past weeks. The forecast is for more downpours throughout the week.

Patty Murray, who represents Washington in the US Senate, gave assurances that federal resources would be made available, as she offered thanks to rescue workers and her prayers to the families of the ravaged community.