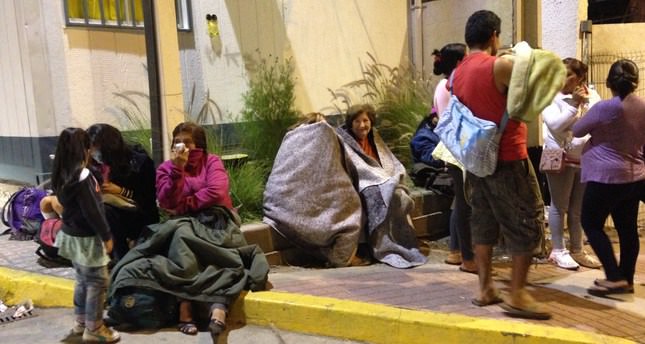 An earthquake measuring 8.2 on the Richter scale strikes Chile's coastal regions, killing at least six people and forcing more than 900,000 people to flee their homes from a possible tsunami

SANTIAGO — A magnitude 8.2 earthquake struck Tuesday in the Pacific Ocean about 99 kilometers north-west of the city of Iquique, the U.S. Geological Survey said. A tsunami warning was put into effect for Chile, Peru and Ecuador. A tsunami watch was in effect for Colombia, Panama and Costa Rica, the Pacific Tsunami Warning Centre said. The U.S. Geological Survey said earthquakes of the size are known to generate tsunamis.

However, President Michelle Bachelet declared a state of emergency in the northern regions of Arica, Parinacota and Tarapaca, where the extent of the damage was becoming known with first light.

Interior Minister Rodrigo Penailillo said the deaths were mostly due to heart attacks and landslides. The quake struck some 100 kilometers off northern Chile at 20:46 Tuesday (23:46 GMT), the Geological Survey said, resulting in roads being cut of by landslides, power outages and infrastructure damage.

Seven aftershocks, one of magnitude 6.2, hit the area within the following hour. The president urged people to "remain calm" and heed the instructions of emergency responders and law enforcement agencies, including the military, which is being deployed to prevent looting and disorder.

The troops will help secure a women's prison in the northern city of Iquique, where some 300 inmates escaped after the quake, the interior minister said.

The president said she would travel to the affected areas and ordered schools to be closed. The Pacific Tsunami Warning Center issued a warning for Colombia, Chile, Ecuador, Panama and Peru shortly after the quake was recorded. The Chilean navy said a 2-metre wave had reached the northern coast about 45 minutes after the quake, while in Peru the wave did not exceed 45 centimeters and caU.S.ed no damage, officials said. As fears of a tsunami faded in South America, authorities across the Pacific Ocean said they were bracing for the impact of high waves.

Disaster officials in Indonesia warned residents to prepare for waves of up to 50 centimeters in Papua province, the Molucca islands, East Java and Sulawesi from 2211 GMT Wednesday to 1344 GMT Thursday.