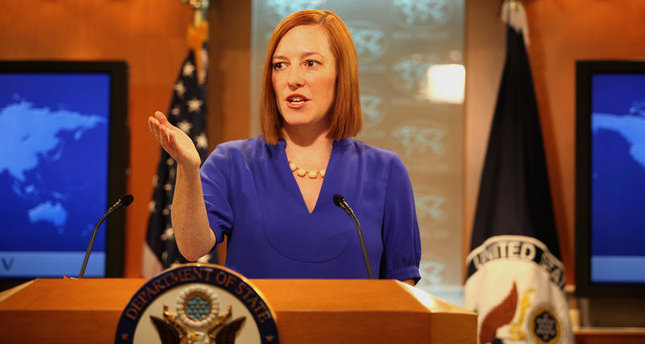 by AA
Apr 22, 2014 12:00 am
WASHINGTON D.C. — The U.S. is examining claims of other recent chemical attacks in Syria, according to the U.S. State Department on Monday.

The U.S. has indications that a toxic industrial chemical, most likely chlorine, was used this month in the rebel-held village of Kafr Zita in Hama governorate, said Jen Psaki, the State Department spokeswoman.

"We're examining allegations that the government was responsible," Psaki said while speaking to reporters Monday. She added the U.S. takes all allegations of the use of chemicals in combat very seriously.

The U.S. is seeking additional information on the attacks with the assistance of the Organization for the Prohibition of Chemical Weapons (OPCW) and the United Nations, Psaki said.

Syrian state-run television said that the gas attacks were the work of al Qaeda-linked Jabhat al Nusra, a major rebel group in the country.


A chemical attack on August 21 of last year in the suburbs of Damascus nearly brought the U.S., who with France and the UK blame the attack on the Syrian government, into open conflict with Syria. Tensions were only diffused after Russia and the U.S. agreed on a deal to

The OPCW has taken the lead in implementing the accord. It said on Saturday that Syria has destroyed 80 percent of its chemical weapons material, and that Damascus is on track to complete disposal by the end of the month.

Regarding Syria's recently announced presidential elections, Psaki said that the poll, which she termed a "referendum", has "no credibility".

"Staging elections under current conditions, including the effective disenfranchisement of millions of Syrians neither addresses the aspirations of the Syrian people nor moves the country any closer to a negotiated political solution," she said.