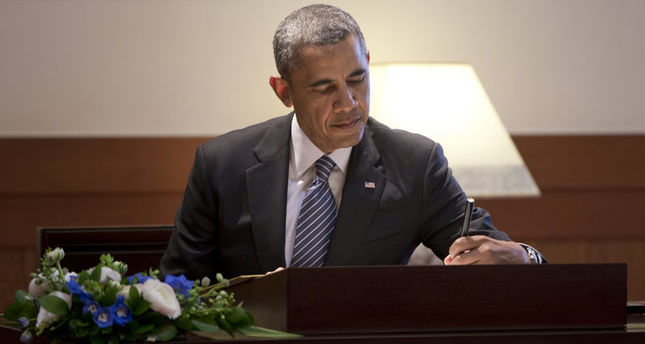 by reuters
Apr 25, 2014 12:00 am
WASHINGTON — U.S. President Barack Obama is expected to speak to several European leaders on Friday to try to nudge the EU toward fresh sanctions against Russia over Ukraine, sources familiar with the matter said.

Disagreements among European Union nations on whether to impose new economic sanctions on Russia have held up punitive steps by the United States, said the sources on condition of anonymity, but Washington could also act on its own.

The United States has so far imposed three rounds of sanctions in connection with the unrest in Ukraine - two aimed at Russian targets and a third focused on Crimean individuals and a Crimean gas company.

The European Union is highly dependent on Russian gas deliveries, and the crisis over Ukraine has fanned concerns about future supply. Russia is also an important market for many EU exporters, notably in Germany.

On March 21, the EU imposed sanctions on 12 Russians and Ukrainians because of Moscow's takeover of Crimea, bringing the number of people targeted by EU asset freezes and travel bans to 33.


On April 14, the EU agreed to expand the list of people subject to such penalties but the bloc has yet to agree on the names or to actually impose the sanctions.