US imposes sanctions against seven Russians, 17 companies linked to Putin 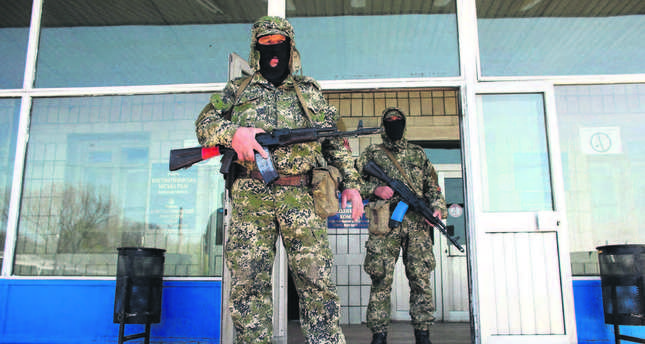 WASHINGTON D.C. — The United States imposed sanctions against seven Russian government officials and 17 companies linked to Russian President Vladimir Putin in its latest measures taken to punish Russia for its intervention in Ukraine.

The White House yesterday said the seven Russians, including two from Putin's inner circle, are now subject to a freeze on any assets they hold in the United States and a ban on U.S. travel.

In addition, the United States will deny export license applications for any hightechnology items that could contribute to Russian military capabilities. The Commerce and State Departments will revoke any existing export licenses that meet these conditions, the White House said.

Meanwhile, mayor of the eastern Ukrainian city of Kharkiv, Gennady Kernes, was shot and badly wounded in the back, his office says Gennady Kernes was "hit by a bullet in the back" during an attack by unknown gunmen, officials said. "He is being operated on. Doctors are fighting for his life."

U.S. President Barack Obama said Monday the United States was poised to unveil fresh sanctions against Russia over the crisis in Ukraine as pro-Kremlin gunmen seized another town in the east.

Speaking in the Philippines, Obama said the sanctions would include export restrictions on high-tech goods in a bid to ratchet up pressure on Russian President Vladimir Putin, blamed for the worst East-West crisis since the Cold War.

Separately, top EU officials are to meet in Brussels to step up European sanctions on Russia as part of a coordinated global effort against Moscow.

On the ground in eastern Ukraine, tensions remained at fever pitch as gunmen stormed the town hall and police offices in Kostyantynivka, the latest in a string of assaults by insurgents on towns in the region.

Rebels also refused to release a group of international monitors from the Organization for Security and Cooperation in Europe (OSCE) after presenting them to the media as "prisoners of war" in what Germany said was a "repugnant" display.

Meanwhile, the threat of a full-scale invasion loomed large over the ex-Soviet country, with tens of thousands of Russian troops amassed on the border and Ukraine's prime minister warning of efforts to start a "third world war." On the last leg of a four-country Asia tour, Obama announced new steps to punish Russia for what the president has called "provocation" on Ukraine's border, where Moscow has conducted military operations.

"Later today, there will be an announcement made. It builds on the sanctions that were already in place," Obama told reporters.
He said Washington would unveil a list of "individuals and companies" that will be sanctioned to build pressure on Putin and Russia's recession-hit economy.

He added the measures would also focus on "high-tech defense exports to Russia" that he said were not appropriate given the tensions between Moscow and the West.

The sanctions are in response to Russia's perceived lack of action to implement an April 17 accord struck in Geneva to defuse the crisis. Obama said Moscow has not "lifted a finger" to enact the deal.

The goal was not to "go after Mr. Putin personally", Obama said but to "change his calculus" and "encourage him to walk the walk and not just talk the talk" in resolving the crisis diplomatically.

The Group of Seven (G-7) top economies vowed swift joint action and EU diplomats were expected to expand the bloc's sanctions against Moscow at a meeting later on Monday. The West already imposed visa and travel restrictions on key members of Putin's inner circle and slapped sanctions on a top bank. But some fear that undermining Russia's economy could tip the world back into recession, just as it begins to recover from the Eurozone debt crisis.

Reflecting these jitters, stocks in Japan closed nearly one percent lower and the yen, seen as a safe haven against uncertainty, gained in value.

However, former tycoon Mikhail Khodorkovsky said sanctions would have "no shortterm effect" on the Russian economy and would take three or four years to really hurt Putin.

On the ground in eastern Ukraine, tensions remained at boiling point as gunmen wielding Kalashnikov rifles seized the town hall and police offices of Kostyantynivka, a town of some 80,000 people.

Separately, frantic negotiations were underway to secure the release of the seven OSCE observers captured by rebels on Friday, whose detention has sparked international outrage.

One man, a Swede, was later freed on medical grounds as he suffers from diabetes.Four Germans, a Pole, a Dane and a Czech remain in detention and there is no indication on the fate of four Ukrainians who were accompanying the mission to assess the implementation of the Geneva deal.

The rebels are also holding three Ukrainian soldiers captured near Slavyansk. Russian television showed the men blindfolded and bloodied, stripped to their undergarments.

The crisis escalated at a breathtaking pace since November when pro-Western protesters in Kiev began mass demonstrations against former Kremlin-backed President Viktor Yanukovych after he rejected an agreement to bring Ukraine closer to the European
Union.