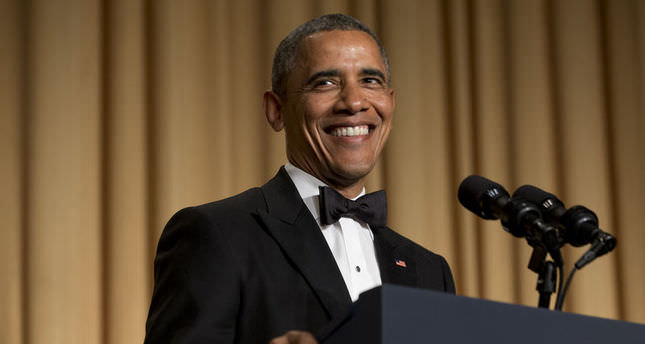 by Associated Press May 04, 2014 12:00 am
WASHINGTON D.C. — President Obama turns comedian at the annual White House Correspondents Dinner. Obama took time to poke fun at himself and celebrities at the star-studded event.

At the annual White House Correspondents' Association dinner on Saturday, Obama observed that the House speaker's fellow Republicans have lately been as critical of Boehner as they've been of him.

"Which proves that orange really is the new black," Obama said to roars of laughter.

The annual dinner has become a tradition in the nation's capital, promising a black-tie evening of humor and celebrity gazing. The event once again attracted an array of journalists, government officials, politicians and media personalities as the association raised money for college scholarships. The featured entertainer was comic actor Joel McHale, the star of the NBC series "Community."

In his own stand-up routine, Obama didn't waste any time turning his barbed jokes toward the news media.

"We rolled out healthcare.gov. That could have gone better," Obama said, poking a little fun at himself and his administration. "In 2008 my slogan was `Yes we can.' In 2013 my slogan was `Control-alt-delete.'"

On the plus side, the president said, "They did turn the launch of healthcare.gov into one of the year's biggest movies." On a screen flashed the poster for "Frozen."

"MSNBC is here," he said. "They're a little overwhelmed. They've never seen an audience this big before."

Noting that he had traveled to Asia recently, Obama said: "The lengths we have to go to get CNN coverage these days. I think they're still searching for their table."

The president saved his sharpest jabs for another cable news network. "The Koch brothers bought a table here tonight, but as usual they used a shadowy right-wing organization as a front. Hello, Fox News!"