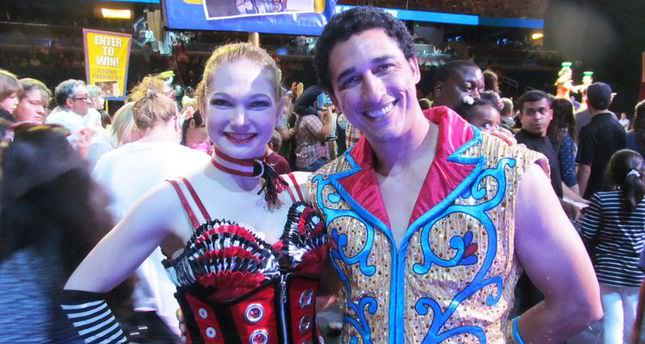 U.S. – "For me, you gotta get back up and do it again," Samantha Pitard told The Associated Press after being released from a hospital Tuesday.

Pitard and seven other acrobats were in an act described as a "human chandelier," hanging from an apparatus by their hair. They were injured during a Sunday performance of the Ringling Bros. and Barnum & Bailey circus when a clip at the top of the chandelier-like apparatus snapped, dropping them to the ground.

The other women are still hospitalized and Pitard said she plans to stay in Providence to support her friends as they work to regain their health.

"I'm hoping to join back up with the tour and show the world that I'm OK, and I'm hoping some of the other girls will do the same," she said.

Pitard, 23, a native of Champaign, Illinois, said she's the only one of the troupe who can walk on her own. The others need assistance or haven't tried to walk because they're undergoing operations. But she said the others are expected to fully recover and are in good spirits after receiving an outpouring of support, including get well cards from children who witnessed the accident. About 3,900 people were in the audience.

"Every single one of us in the troupe, every single circus performer, knows that they are risking their lives every time they go out there to perform or practice," she said. "We hope it doesn't happen, but we know that we are taking that risk, and we love it enough to take that risk every day to make people happy."

Pitard said it had been a normal performance Sunday. The curtain dropped to reveal the eight women suspended in the air, but it went wrong when they did their third leg position.

"We heard a huge crack, huge noise, and then we were just plummeting to the ground," she said. "It was very fast. I remember everything."

The 350-pound chandelier landed on them. She said rescue crews got to them quickly to free them from the apparatus, then gave them medical attention.

"I was sitting up, and once I caught my breath, I was looking at all the girls," she said. "I wanted to know that everybody was OK. I saw my troupe leader (Viktoriya Medeiros), she was right next to me, and I heard her say that she couldn't feel her legs."

The paramedics instructed her to lie down.

Pitard described her injuries, including fractures on her spine, a cut on her head that required three stitches and a badly bitten tongue, as minor.

Local investigators are turning over the broken clip and other material to federal workplace safety authorities. Fire investigator Paul Doughty said they have narrowed down the cause of the broken clip to two possibilities: a manufacturing defect or improper use.

The circus inspected its equipment Monday night when it loaded up in Providence and planned another inspection when it unloaded in Hartford, Connecticut, where it performs next, said Stephen Payne, a spokesman for Feld Entertainment, Ringling's parent company. The hair act won't be performed there, the company said.

Pitard said she became interested in being in the circus as a child during a camp that offered a circus program.

She later attended the New England Center for Circus Arts and learned aerial acrobat skills. She joined Ringling Bros. as a clown in November 2012 and later was invited to join the highly specialized hair-hanging act.

She trained for months to develop the act being performed Sunday, which has the acrobats doing spins and other moves while hanging from their hair. Her favorite part is holding two other performers up with her hair.

"It's an amazing feeling to know I'm holding two girls, two grown women, by my hair," she said. "There's just something very, very cool about it."

She said the way they're hooked into the apparatus is so secure they don't even practice with a net and she doesn't believe a net would have lessened their injuries because the apparatus still would have fallen on them.