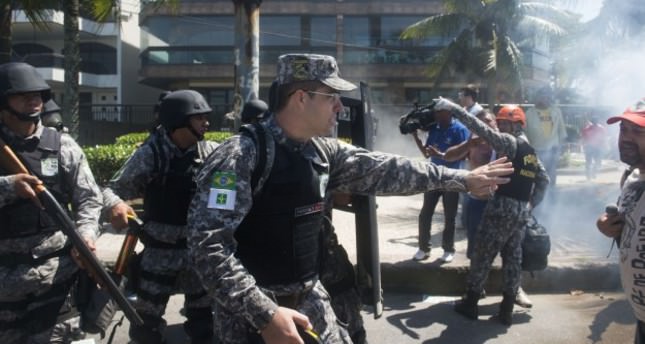 by AA May 07, 2014 12:00 am
SAO PAULO — A man is in custody in connection with the death of a football (soccer) fan in the World Cup host city of Recife in Brazil's northeast region, local media reported Tuesday.

Paulo Ricardo Gomes da Silva, 26, died Friday after being hit by one of two toilet bowls ripped from the Arruda stadium and thrown from the upper level of the spectator stands. Three other people were also injured in the incident.

Everton Felipe Santana, 23, was arrested Monday and transferred to a local prison overnight after admitting the crime to police.

The arrest was made after information was received by a caller to a police hotline set up after the attack, and police say they are looking for others in connection with the crime.

Santana's attorney, Adelson José da Silva, was quoted by the G1 news Internet portal as saying that his client "knew the risks" that his actions could have but "had no intention of hitting anyone."

Santana, an assistant in a local school, is said to regret the crime and be fearful of reprisals.

Football fans were leaving the stadium at the time of the incident after a second division clash between Paraná and Santa Cruz football clubs.

Closed circuit television footage of the moment the toilet bowls were thrown from a height of 24 meters (79 feet) has been broadcast repeatedly in Brazil, and the death has been widely debated.

A funeral service for Gomes da Silva, who worked as a welder, was held Sunday, reuniting hundreds of locals and football fans.
The Arruda stadium has been temporarily banned from holding matches pending an investigation.

The key football tournament kicks off in São Paulo on June 12 and will be held in twelve brand new or completely-renovated stadiums in cities across the country.