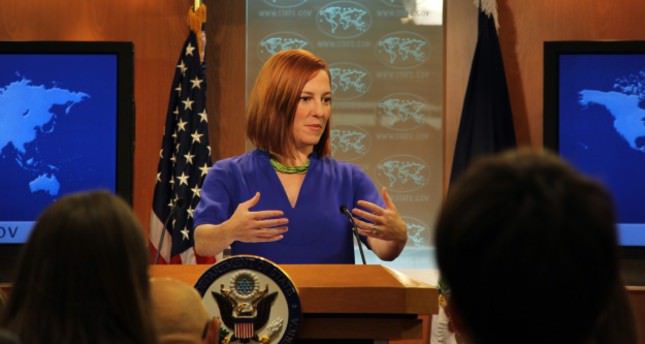 by AA May 07, 2014 12:00 am
WASHINGTON, D.C. – Proposed referendums to decide the status of two Ukrainian provinces threatening to breakaway are illegal, the U.S. said Tuesday as it instead endorsed nationwide elections planned for month's end.

Separatists in the restive eastern regions of Donetsk and Luhansk have planned their own referendums for this Sunday, May 11, to potentially break away from Ukraine and form an independent republic.

"No civilized nation is going to recognize the results of such a bogus effort," said U.S. Secretary of State John Kerry during a joint press conference with Catherine Ashton, his EU counterpart.

Jen Psaki, the State Department spokesperson, said that the planned referendums are "illegal" adding, "This is the Crimea playbook all over again."

Psaki further jabbed at a planned visit of Russian President Vladimir Putin to Crimea on May 9, remarking, "I hope he enjoys his visit to Ukraine."

Pro-Russian separatists have dealt serious blows to Kiev's authority in the east of the country as they continue to seize government offices and set up checkpoints around Donetsk and Luhansk.

Nation-wide presidential elections are scheduled for May 25 in Ukraine that both the EU and U.S. have said is a critical next step for the country.

Both the EU and U.S. have imposed two rounds of sanctions on Russia for its annexation of Ukraine's Crimean peninsula, and for, what they say, is Russia's role in fomenting unrest in the east of the country.