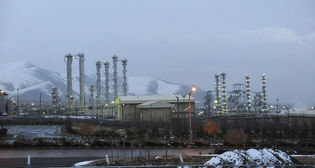 by AA May 08, 2014 12:00 am
NEW YORK — Iran and the six world powers held 'constructive talks' on Iran's nuclear activities, according to Iran's nuclear negotiator Hamid Baeedinejad.

The two-day expert level meetings were held in New York on May 6 and May 7, talks which aimed at contributing to the next round of senior-level negotiations in Vienna on May 13.

''The parties are discussing technical issues in preparation for the next session of negotiations in Vienna,'' Baeedinejad said.

The world powers aim to curb Iran's nuclear activities while it is seeking a release from sanctions, which threaten to cripple its economy.

Iran agreed with U.S., UK, Russia, China, France and Germany, also known as P5+1, to negotiate on its nuclear activities in November 24 in Geneva. The fourth rounds of talk will be held in Vienna on May 13.