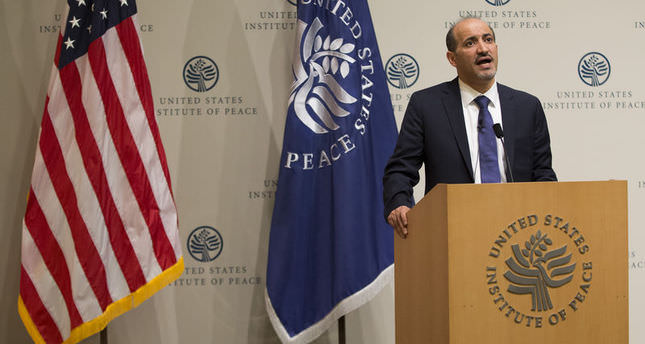 by AA May 08, 2014 12:00 am
WASHINGTON, D.C. — The head of the Syrian opposition called a presidential election planned for June an "insult" while addressing reporters during a week-long visit to the U.S.

Syrian President Bashar al Assad announced presidential elections for June 3 even as the country continues to find itself in the midst of heavy fighting between forces aligned with Assad and opposition fighters.

"The Syrian people declined this election three years ago," said Ahmad Jarba, the president of the National Coalition for Syrian Revolutionary and Opposition Forces while speaking to select outlets. "The international community must stand up on this issue, because this election is an insult for the Syrian people."

Jabra minimized the severity of divisions within the Syrian opposition.

"I don't think that the opposition today is strongly divided," he said. "Those divisions happened previously and we are now in a new phase."

Jarba is leading a week-long delegation of Syrian opposition leaders to Washington during which time he will meet with members of the U.S. Congress, the State Department and the National Security Council.