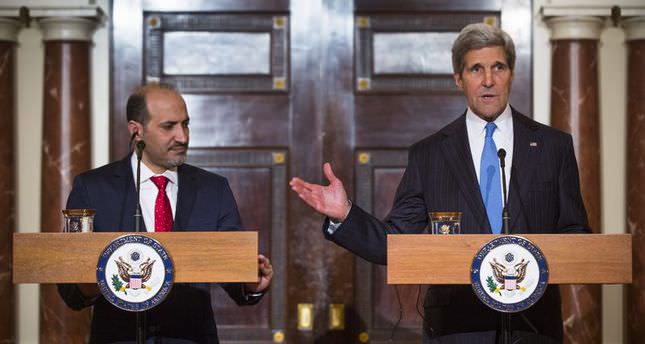 by AA May 09, 2014 12:00 am
WASHINGTON, D.C. — U.S. Secretary of State John Kerry expressed his commitment to the moderate Syrian opposition on Thursday as Washington announced a new wave of sanctions on the Syrian government and its supporters.

Ahmad Jarba, the Syrian Opposition Coalition President, is leading a delegation to Washington this week to meet with leading U.S. officials from the U.S. Congress, State Department and the National Security Council.

"We've had difficult moments in this journey, but we are committed to do our part to support the moderate opposition in its efforts to provide a legitimate voice to the aspirations and hopes of the Syrian people," said Kerry prior to meeting with Jarba at the State Department.

Washington further tightened the economic spigot on the Syria government on Thursday, as it announced sanctions on six senior Syrian officials, and a Russian bank, for their support of Syrian President Bashar al Assad.