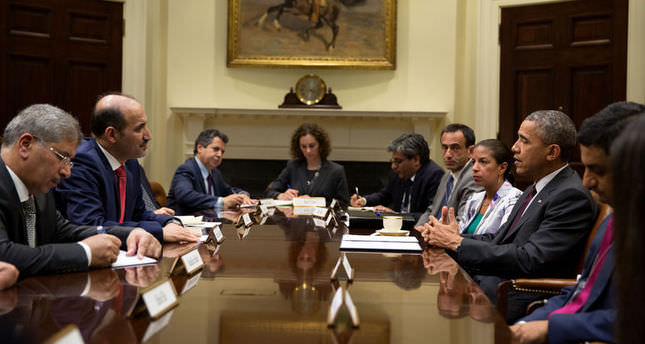 by AA May 14, 2014 12:00 am
WASHINGTON D.C. — U.S. President Barack Obama and National Security Advisor Susan Rice met with Ahmad Jarba, the Syrian Opposition Coalition President, at the White House to reaffirm their support for Jarba and his allies Tuesday.

During their meeting, Obama welcomed the opposition's leadership, while encouraging "the Coalition to further its vision for an inclusive government that represents all of the people of Syria," according to a readout of the meeting provided by the White House.

For his part Jarba thanked the U.S. for its $287 million contribution in nonlethal aid, and for being the largest donor of humanitarian assistance to the Syrian people both inside and outside the country.

Both the US and Syrian opposition delegations reaffirmed their support for a political resolution to Syria's ongoing crisis.

Their meeting comes the same day that Lakhdar Brahimi, the U.N.'s Syria envoy, announced his resignation after two rounds of Geneva peace talks failed to bring about meaningful change for Syria. He will leave his post at the end of May.