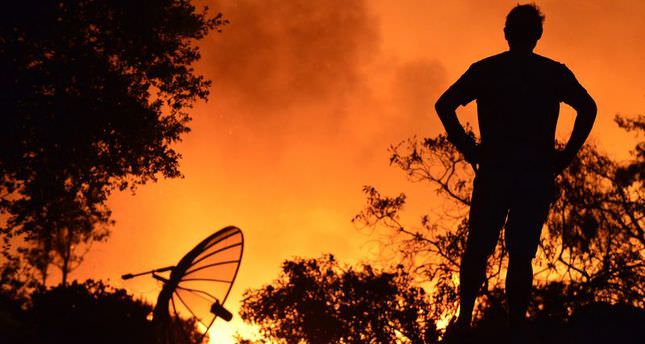 by May 15, 2014 12:00 am
SAN DIEGO — Wildfires roared out of control in Southern California, forcing authorities in San Diego county on Wednesday to order thousands of people to abandon their homes, including students at a state university, though no major injuries were reported.

Television images showed several homes in flames, with thick black smoke filling the sky and drifting over the Pacific Ocean, as California entered the height of wildfire season in the midst of one of the state's worst droughts on record.

One fire, which erupted shortly before 11 a.m. in Carlsbad, some 25 miles north of San Diego, quickly became the most pressing battle for crews fighting flames across the region amid soaring temperatures and hot Santa Ana winds.

In Carlsbad at least eight residences, one apartment building, and two businesses burned to the ground. A state university was evacuated in nearby San Marcos amid other evacuation notices.

Officials told a news conference that nine fires had burned more than 9,000 acres in the county by late Wednesday.


Another fire, called the Tomahawk, broke out on the Camp Pendleton Marine Base north of San Diego and had charred roughly 6,000 acres by Wednesday evening, prompting evacuation of military housing and a naval weapons station.

Fire officials fear the drought could be provide the tinder for a particularly dangerous year for wildfires in the state.