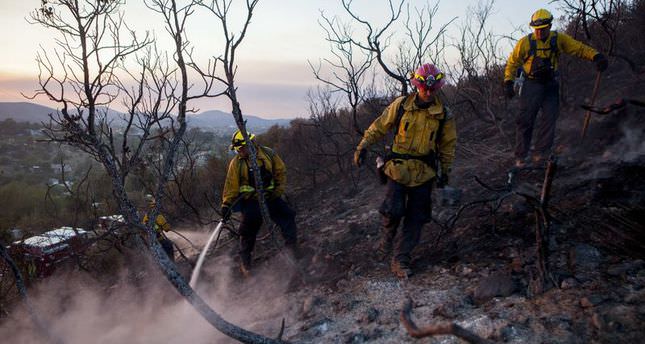 by May 16, 2014 12:00 am
SAN DIEGO — California firefighters were battling wind-whipped wildfires on Friday, as some 125,000 people fled their homes in the San Diego area and police arrested at least two people on arson-related charges.

The cluster of fires comes as California enters its peak fire season amid its worst drought in decades. Officials worry it could be a particularly dangerous year.

Crews made some progress against the fires, which have scorched thousands of acres this week across Southern California. But they had only a tenuous grip on the so-called Cocos Fire, which was threatening the northern San Diego county communities of San Marcos and Escondido.

Late on Thursday, Escondido Police said they had arrested two teens, ages 17 and a 19-year-old, identified as Isaiah Silva, on arson-related charges after locating the pair near a mall. They matched descriptions by witnesses of two people trying to set fires in the South Escondido area.