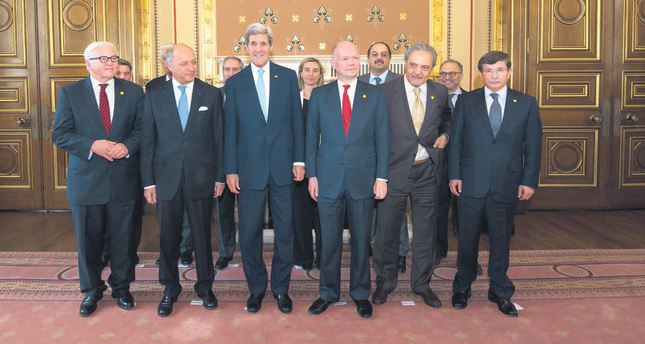 U.S. Secretary of State John Kerry said he had seen raw data suggesting that Syria used chlorine in gas attacks against its own people, though he said the data had not yet been verified

Speaking after a meeting of Western and Arab countries in the Friends of Syria group, Kerry said: "I have seen the raw data that suggests that there may have been, as France has suggested, a number of instances in which chlorine has been used in the conduct of war." "If it has, and it could be proven, then that would be against the agreements of the chemical weapons treaty and against the weapons convention that Syria has signed up to." Kerry, who earlier met foreign ministers from European Union and Gulf Arab countries that are opposed to Syrian President Bashar al-Assad, said the data had not been verified.

Kerry said: "Every possible avenue that is available will be pursued by one country or another. We are open to the idea of providing aid through any means that will get to people who need it and while a decision has not categorically made, we are open to anything." But he declined to say whether that would include arming the Syrian rebels. "I am not going to discuss specific weapons and what country may or may not be providing (weapons) but out of today's meeting every facet of what can be done is going to be ramped up, and that includes a political effort, aid to the opposition, it includes economic efforts and sanctions," Kerry said. He said the U.S. and its European and Gulf allies rejected planned Syrian elections as illegitimate. "Together we are unified in saying that Assad's staged elections are a farce - they are an insult (and) they are flawed," he said.

Meanwhile, in a communique agreed upon at the meeting, ministers said that they condemned the Syrian regime's "unilateral plan to hold illegitimate presidential elections." Ministers also voiced their unanimous agreement to boost their support to the Syrian opposition's National Coalition, Supreme Military Council and "associated moderate armed groups."

The Friends of Syria group is made up of Britain, Egypt, France, Germany, Italy, Jordan, Qatar, Saudi Arabia, Turkey, the United Arab Emirates and the U.S. Syrian opposition leader Ahmad Jarba also took part after attending a week of high-level meetings in Washington in a bid to strengthen U.S. support for the rebels in their battle against Assad. Specifically Jarba pleaded for anti-aircraft missiles to shoot down regime aircraft which are dropping deadly barrel bombs on Syrian civilians. "Keeping the pressure on the regime will increase the chances of finding a political solution," Jarba said in a statement.

In a sign of the deep divisions within the rebel movement, the U.S. government officially designated two officials of rival jihadist groups in Syria as "global terrorists" Wednesday, and warned other rebel groups to stay away from both men.

The U.S. Treasury added Saudi-born Abd Al-Rahman Muhammad Zafir Al-Dubaysi al- Juhni and Iraq native Abd Al-Rahman Mustafa al-Qaduli to its list of Specially Designated Global Terrorists. The two were cited for their ties to al-Qaeda operations in Syria, and al-Qaeda breakaway group the Islamic State of Iraq and the Levant (ISIL).

Al-Juhni is part of a group of senior al-Qaeda operatives in Syria formed to attack Western targets outside the country and also to mediate tensions between ISIL and the al-Nusra Front, the local al-Qaeda affiliate, the Treasury said.

Meanwhile, while the foreign minister discuss the Syria crisis, an explosion near a border crossing between Syria and Turkey killed at least 30 people and wounded many others Thursday, an activist group monitoring the Syrian civil war said. The Britain-based Syrian Observatory for Human Rights said the explosion occurred at a garage near the Bab al-Salameh border crossing in the northern Syrian province of Aleppo. The garage is used by passengers who come to or leave the crossing point, said Rami Abdurrahman, the Observatory's chief. The Local Coordination Committees, another activist group, said a car bomb at the border crossing killed and wounded "many" people.

Such explosions have occurred in the past in border areas near Turkey. In addition, the opposition detonated 60 tons of explosives packed underneath a large Syrian army base, blowing a hillside hundreds of meters into the air, an insurgent in the operation who provided footage of the attack said on Thursday. The casualty toll from the blast was not immediately known.
RELATED TOPICS