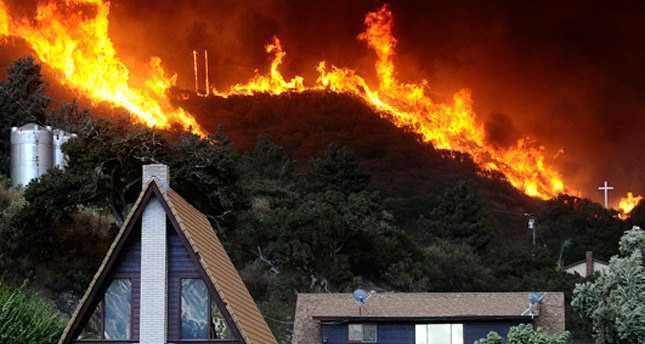 by May 16, 2014 12:00 am
LOS ANGELES — Firefighters found a badly burned body in a transient camp engulfed by raging wildfires, the first death from the blazes which have ravaged large parts of southern California. Cooling temperatures fueled hopes Friday that thousands of people evacuated could begin returning to their homes, threatened by three days of fires.

Strong seasonal Santa Ana winds whipped up so-called "firenados" -- columns of rapidly rotating flames -- at the height of the crisis, which saw thousands of firefighters swarm to tackle up to nine separate blazes. There had been no reported fatalities across San Diego County until late Thursday when authorities in the beach resort of Carlsbad confirmed a body had been found.

"During a hot spot check, firefighters were alerted to a transient encampment .. on checking the area, (they) located a badly burned body," said a statement.

One of the worst hit areas was San Marcos, 15 miles inland from Carlsbad, which is north of San Diego. On Friday, the fire there had more than doubled in size overnight to over 3,000 acres. But cooling temperatures meant firefighters were more hopeful of bringing that blaze and others under control.

"Weather continues to be favorable, with 5 mph winds and higher humidity forecast through the weekend," said a Carlsbad city spokesman.
California and other western US states are routinely hit with wildfires during the summer and fall, but blazes have occurred earlier in the year in recent times. So many blazes at once in only mid-May is very rare.