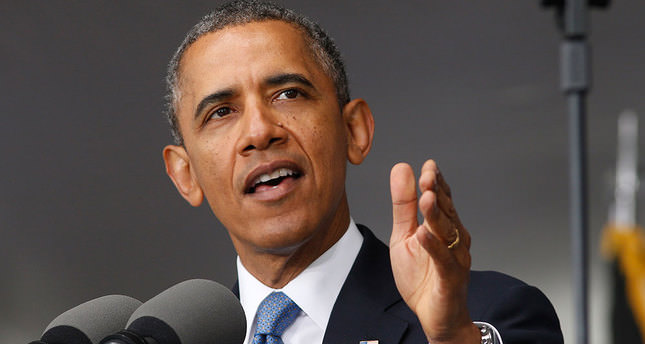 by AA May 29, 2014 12:00 am
NEW YORK — "U.S. military action cannot be the only – or even primary – component of our leadership in every instance. Just because we have the best hammer does not mean that every problem is a nail, "U.S. President Barack Obama said as he addressed thousands of cadets graduating from the U.S. Military Academy at West Point on Wednesday.

The president remembered delivering his first speech at West Point in 2009 when there were 100,000 American soldiers in Iraq and the U.S. government was preparing to increase its troops in Afghanistan, adding "Four and a half years later, the landscape has changed. We have removed our troops from Iraq. We are winding down our war in Afghanistan."

Refuting those who suggest America is in decline or has seen its global leadership slip away, Obama accused them of misreading history or being engaged in partisan politics, underscoring that the U.S. military has no peer and the potential threat by any nation against the U.S. is low.

"When a typhoon hits the Philippines, or girls are kidnapped in Nigeria, or masked men occupy a building in Ukraine, it is America that the world looks to for help," said the president, depicting the United States as an "indispensable nation".

Describing his vision for the future leadership of the U.S. and its military, Obama said the country will use military force, unilaterally if necessary, when its core interests demand it or its people are threatened.

"...But America should never ask permission to protect its people, its homeland, or its way of life." he added.

Deeming "terrorism" as the most direct threat to America at home and abroad, Obama, during his speech, stressed the need for a strategy, which involves invading every country that harbors terrorist networks and more effective partnerships with countries where terrorist networks seek a foothold.

The President also used his speech to call on Congress to support a new Counter-Terrorism Partnerships Fund of up to $5 billion, which will allow the country to train, build capacity and facilitate partner countries on the front lines.

Obama also pledged that the U.S. government would step up efforts to support Syria's neighbors, Jordan, Lebanon, Turkey and Iraq, hosting large numbers of refugees from the conflict.

He added "I will work with Congress to ramp up support for those in the Syrian opposition who offer the best alternative to terrorists and a brutal dictator [Syrian President Bashar al-Assad]."

The U.S. president also said "respect for human rights is an antidote to instability, and the grievances that fuel violence and terror."

The Syrian crisis now in its fourth year has claimed hundreds of thousands of lives and displaced millions.