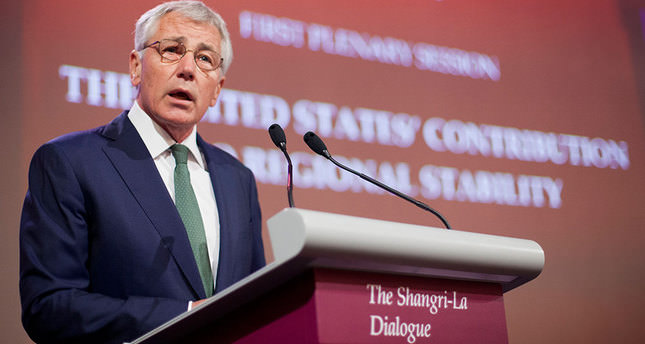 by May 31, 2014 12:00 am
WASHINGTON D.C. — The United States warned China on Saturday to halt destabilising actions in Asia as Washington and its allies sought to boost defence cooperation in the face of what Japan called an "increasingly severe" security environment.

Using unusually strong language, U.S. Defense Secretary Chuck Hagel told an Asia-Pacific security forum that the United States was committed to its geopolitical rebalance to the region and "will not look the other way when fundamental principles of the international order are being challenged".

"In recent months, China has undertaken destabilising, unilateral actions asserting its claims in the South China Sea," he said in the speech to the Shangri-La Dialogue in Singapore.

Hagel said the United States took no position on the merits of rival territorial claims in the region, but added: "We firmly oppose any nation's use of intimidation, coercion, or the threat of force to assert these claims."

"It is unfortunate that there are security concerns in the East and South China Seas," he said. "Japan as well as all concerned parties must uphold the rule of law and never attempt to unilaterally change the status quo by force."

China claims almost the entire oil- and gas-rich South China Seas, and dismisses competing claims from Taiwan, Brunei, Vietnam, the Philippines and Malaysia. Japan has its own territorial row with China over islands in the East China Sea.

Tensions have surged in recent weeks after China placed an oil rig in waters claimed by Vietnam, and the Philippines said Beijing could be building an airstrip on a disputed island.

On Friday, Prime Minister Shinzo Abe told the Singapore forum that Tokyo would offer its "utmost support" to Southeast Asian countries in their efforts to protect their seas and airspace, as he pitched his plan for Japan to take on a bigger international security role.

In a pointed dig at China, he said Japan would provide coast guard patrol boats to the Philippines and Vietnam.

In Beijing, President Xi Jinping said China would not initiate aggressive action in the South China Sea but would respond if other countries did, the official Xinhua news agency reported.

"We will never stir up trouble, but will react in the necessary way to the provocations of countries involved," Xinhua quoted Xi as saying in a meeting on Friday with Prime Minister Najib Razak of Malaysia.

The strong comments on China at the Shangri-La Dialogue come as Abe pursues a controversial push to ease restrictions of the post-war, pacifist constitution that has kept Japan's military from fighting overseas since World War Two.

"Japan intends to play an even greater and more proactive role than it has until now in making peace in Asia and the world something more certain," he said.

China has said Abe's government was using the islands dispute as an excuse to revive its military.

"He has made it into a bigger issue - that is China as a country is posing a threat to Japan as a country," Fu Ying, Beijing's chief delegate to the forum, said on Friday.

"He has made such a myth. And then with that as an excuse, (he is) trying to amend the security policy of Japan, that is what is worrying for the region and for China."

Despite memories of Japan's harsh wartime occupation of much of Southeast Asia, several countries in the region may view Abe's message favourably because of China's increasing assertiveness.

The United States, having to implement cuts to its vast military budget at a time of austerity, is keen to see allies play a greater role in security and Hagel gave an enthusiastic U.S. endorsement to Abe's speech.

Hagel repeatedly stressed Obama's commitment to the Asia-Pacific rebalance and said the strong U.S. military presence in the region would endure.

"To ensure that the rebalance is fully implemented, both President Obama and I remain committed to ensuring that any reductions in U.S. defense spending do not come at the expense of America's commitments in the Asia-Pacific," he said.

In spite of his strong criticisms of China, Hagel said the United States was increasing military-to-military engagement with Beijing to improve communication and build understanding.

"All nations of the region, including China, have a choice: to unite and recommit to a stable regional order, or, to walk away from that commitment and risk the peace and security that has benefited millions of people throughout the Asia Pacific, and billions around the world."