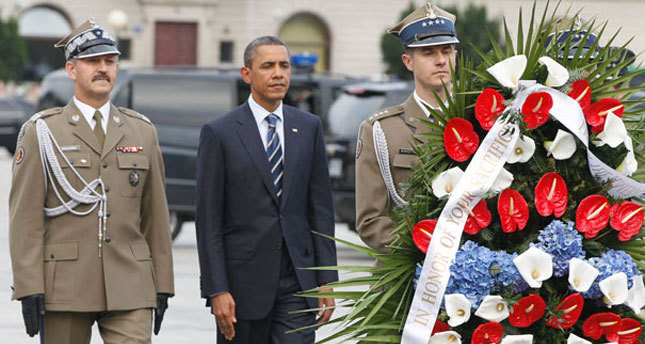 by AA Jun 04, 2014 12:00 am
WARSAW — U.S. President Barack Obama reaffirmed NATO's commitment to the defense of Poland and its allies in Eastern Europe against possible new aggression in the region.

"I know that throughout history the Polish people were abandoned by friends when they needed them the most. So I have come to Warsaw on behalf of the U.S., on behalf of the NATO alliance to reaffirm our unwavering commitment to Poland's security," Obama told a ceremony for Polish Freedom Day in Warsaw, addressing more than 40 leaders and government representatives of European countries.

"Article 5 (of the NATO charter) is clear. An attack to one is an attack on all, and as allies we have a solemn duty, a binding treaty obligation to defend your territorial integrity, and we will. We stand together now and forever for your freedom," Obama said, in one of his most strong remarks reaffirming commitment to the security of allies in the region.

"These are not just words. They are unbreakable commitments made by the strongest alliance in the world and the armed forces of the U.S., the most powerful military in history."

Obama's statement drew long ovation from the leaders and government representatives, as well as Polish people listening the address at the garden of the Royal Castle Royal. Some of the participants from the public audience shouted "Thank you Obama! Thank you Obama!"

Obama's visit to Poland marks the first leg of his second European tour this year.

His visit aims to address the growing concerns of eastern European allies over Russia's foreign policy following its annexation of Crimea. Obama is also scheduled to meet Western European leaders to coordinate policies on Ukraine.

Obama will visit Brussels Wednesday afternoon and participate in the G7 summit where talks are expected to focus on Ukraine.