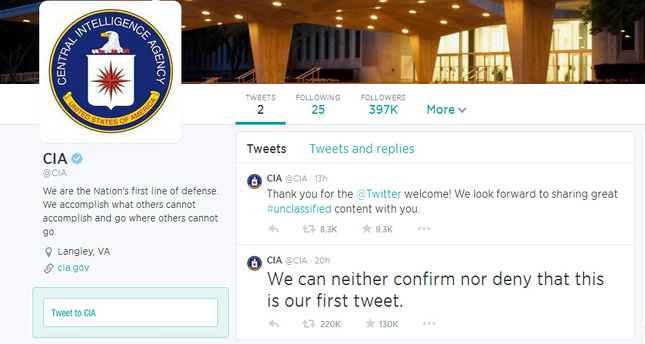 by Associated Press Jun 07, 2014 12:00 am
WASHINGTON — For a spy agency that likes to operate undercover, the CIA's debut on Twitter has revealed a cryptic sense of humor.

In a medium heralded for its snide remarks, the Twittersphere gave high praise for the intelligence agency's first tweet, under the handle @CIA.

It debuted Friday with a sly message neither confirming or denying it was the CIA's first tweet.

Within an hour it had gained more than 67,000 followers.

The agency quickly confirmed in a news release that it had, in fact, established a presence on Twitter and also on Facebook.

On both accounts, the CIA promised photos, reflections on intelligence history, and fun facts from the CIA World Factbook.