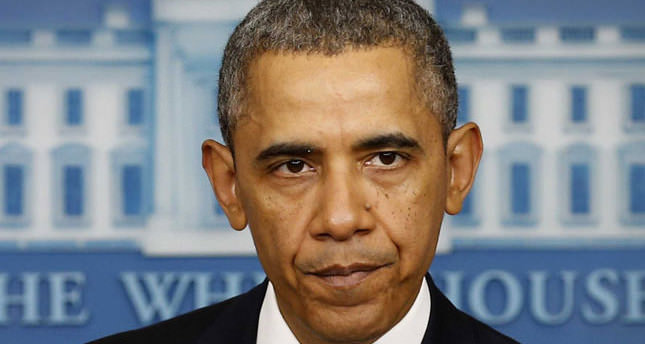 by Ragıp Soylu Jun 07, 2014 12:00 am
WASHINGTON, D.C. — U.S. President Barack Obama is under pressure following reports that while on a recent trip to Asia he described his administration's foreign policy using the phrase, "Don't do stupid shit." First reported in Politico magazine and then appearing in Foreign Policy Magazine, many sources and writers claim that after reading many critical articles against his administration's handling of foreign affairs, Obama met with journalists on board Air Force One and defended himself angrily. According to David Rohkopf 's articles published on Thursday, during the exchange Obama stood up, headed toward his own cabin on the plane and then stopped. "He turned back to the gathered reporters, and, much like an elementary school teacher hammering rote learning into students, he said, "So what is my foreign policy?" The reporters in unison, then said, "Don't do stupid shit," Rohkopf 's article reads.

Many reporters published stories last months that even Obama's aides and top advisers used the phrase "Don't do stupid stuff " as a justification against hard reasoning by the supporters of more active engagement in Syria. This week former U.S. Ambassador to Syria, Robert Ford said that he has resigned from his post because he could no longer defend the Obama administration's Syria policy. "We have been unable to address either the root causes of the conflict in terms of the fighting on the ground and the balance on the ground and we have a growing extremism threat," he said in an interview to CNN's Christiane Amanpour.

Then yesterday another former U.S. Ambassador to Syria Theodore H. Kattouf sided with Ford and claimed that U.S. miscalculated support for Assad and had no plan to achieve his ouster. The flow of articles slamming Obama's foreign policy intensified after his landmark speech on the issue last week at West Point Military Academy. Obama raised the bar for military intervention in his speech and put on more careful and determined tone against it. Walter Russell Mead, the editor of American Interest Magazine, said that the Obama administration was not successful at solving a variety of problems, including Russia's increasing meddling in Ukraine, al-Qaeda's rise in the Middle East, the jihadist threat in Syria and Egypt's failed democracy. "At this point, none of President Obama's foreign policy problems can be solved by a teleprompter. The president doesn't need more speechwriters or better ones. He needs something totally different: He needs some real-world wins," he wrote in his latest article.

Obama's foreign policy strategy is poised to receive more heated debate in the coming days, especially after the swap between the Taliban in return of Sgt. Bowe Bergdahl sparked a strong backlash from the Republicans, many reports suggesting that Berghdahl was a deserter, declared himself to be a mujahid in his captive years and fraternized with the Taliban fighters. However until now, there is no sign that Obama will take a different approach and change the course of his strategy in the world, at least not yet.
Last Update: Jun 07, 2014 7:57 pm
RELATED TOPICS