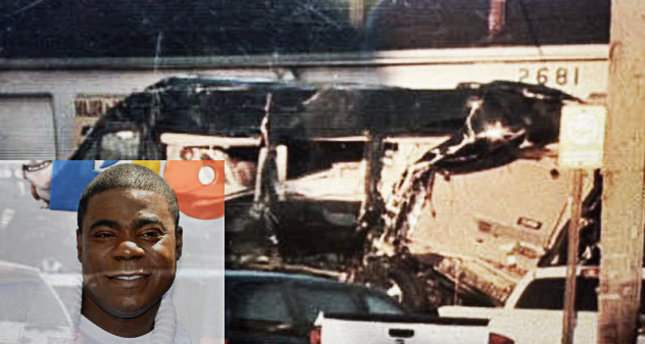 by Associated Press Jun 08, 2014 12:00 am
NEW BRUNSWICK, N.J. — American actor and comedian Tracy Morgan remained hospitalized as state and federal officials continued their investigation of a six-vehicle crash on the New Jersey Turnpike that took the life of a Morgan friend and left two others seriously injured, authorities say.

Morgan, 45, was in critical condition and his family arrived to be with him after a tractor-trailer rammed into his chauffeured limousine bus, carrying seven people, his spokesman Lewis Kay said. Morgan was "receiving excellent care," the spokesman said.

A truck driver was charged with death by auto in the Saturday crash that killed comedian James McNair, described as a mentor to the
former "Saturday Night Live" and "30 Rock" cast member.

Thirty-five-year-old Kevin Roper, of Jonesboro, Georgia, also faces four counts of assault by auto, Middlesex County prosecutors said. His bail was set at $50,000, and he was expected to turn himself in. It wasn't immediately clear if he had an attorney.

Morgan and the group were traveling home from a standup comedy show in Delaware, officials said. About 1 a.m., near Cranbury Township, the tractor-trailer driver apparently failed to slow for traffic ahead and swerved at the last minute to avoid a crash, state police Sgt. 1st Class Greg Williams said.

Instead, the big rig smashed into the back of the Mercedes limo bus, prompting a chain-reaction crash with a second tractor-trailer, an SUV and two cars.

McNair, 62, of Peekskill, New York, who performed as Jimmy Mack, died when the limo overturned on the turnpike, Williams said. Morgan and Jeffrey Millea, 36, of Shelton, Connecticut, were flown from the accident scene to Robert Wood Johnson Hospital, where they were in critical condition, hospital spokesman Peter Haigney said.

A fourth passenger, comedian Ardie Fuqua Jr., was also in critical condition, while a fifth passenger, comic Harris Stanton, was treated and released, Haigney said. Two others in the limo were unhurt, including the driver.