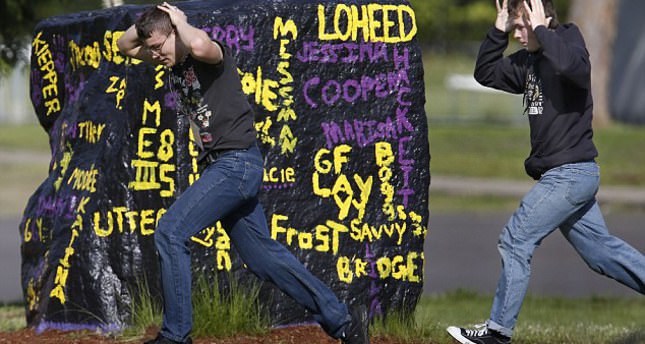 by Jun 10, 2014 12:00 am
LOS ANGELES — A gunman who reportedly opened fire at an Oregon high school Tuesday is dead and the situation is "stabilized," police said, after America's latest school shooting incident.

Large numbers of armed police scambled to lock down Reynolds High School in the northwestern US state after reports of shots fired around 8:00 am. But about an hour later the Multnomah County Sheriff's Office said the situation was under control, and the gunman dead.

"The situation is stabilized, the shooter is confirmed deceased," it said in a statement, adding that "multiple agencies responded and tactical teams are currently evacuating students and staff."

There were no immediate reports of casualties, as children could be seen in live TV images filing out with their hands on their heads.
Some 60 law enforcement officers and 19 medical personnel descended on the school, according to local KOIN television.

The shooting is the latest in a spate of such incidents over the past few weeks in the former Wild West region of the United States.

On May 23, a student with mental problems, the son of a Hollywood director, went on a gun rampage at a college campus in Santa Barbara, north of Los Angeles, killing six people and then himself.

On June 5, a gunman killed one person and injured two others on on a college campus in the northwestern US city of Seattle, in what the local mayor denounced as America's "epidemic of gun violence."

On Sunday, a couple with possible links to anti-government militia shot dead two police officers execution-style in a Las Vegas pizza restaurant, before killing another civilian nearby and then themselves.
Last Update: Jun 10, 2014 7:52 pm
RELATED TOPICS