Obama: US ready for targeted and precise action in Iraq 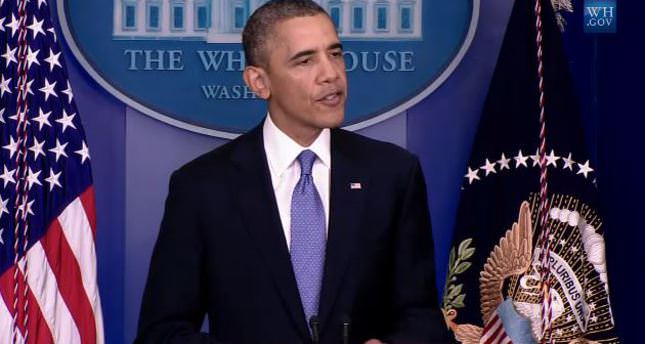 by Daily Sabah with Agencies Jun 19, 2014 12:00 am
U.S. president Barack Obama after a meeting with his national security team said they will not send military assistance into Iraq during statement on Thursday evening that cleared up speculations on whether the U.S. would send support amidst the self pro-claimed Islamic State of Iraq and al-Sham's (ISIS) insurgency of northern Iraq. Obama said the U.S. will send up to 300 military advisers to Iraq, set up joint operation centers.

Obama said the military advisors in Iraq will help the Iraqi military and will deploy "precise targeted military action" if and when the situation demands it. The U.S. has increased its intelligence, surveillance and reconnaissance operations in Iraq to better understand the threats to Baghdad. The U.S. will also send Secratary of State John Kerry to the region to assess the current situation in Iraq.

The U.S. will also keep a diplomatic effort to work with Iraqi leaders and promote stability.President Barack Obama stated that it will be hard for the current Iraqi government to resolve the country's crisis unless the government is more inclusive.

Obama stopped short of calling for Iraqi Prime Minister Nouri al-Maliki to resign. He says it's not the United States' job to choose Iraq's leaders. He stated that whoever is prime minister must make sure all sectarian groups feel they can advance their interest through the political process.

Obama and his national security team met to discuss how strongly to press Iraqi Prime Minister Nouri al-Maliki to undertake reforms and make his government more inclusive. Top U.S. officials believe that giving more credence to Sunni concerns about al-Maliki may offer the best opportunity to stave off another deadly round of sectarian fighting of the kind that engulfed Iraq less than a decade ago.

U.S. officials said there was concern within the administration that pushing al-Maliki too hard might stiffen his resolve to stay in office and drive him closer to Iran, which is seeking to keep the Shiite leader in power.

The Obama administration wants to see evidence of a leadership transition plan being put in place in Iraq.