Immigration in America's DNA, military members sworn in as citizens 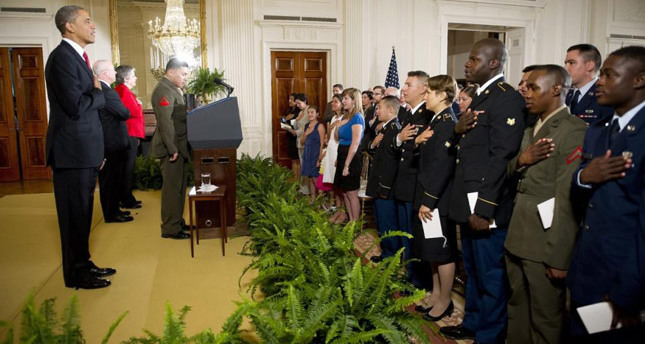 by Jul 04, 2014 12:00 am
President Barack Obama on Friday called America's legacy as a country of immigrants part of the nation's "DNA," as members of the military community were sworn in as citizens at the White House.

At a Fourth of July event marking the 238th anniversary of American independence, Obama praised the newly minted citizens -- some two dozen active duty military, their spouses, veterans, and reservists -- who "remind us that America is and always has been a nation of immigrants."

The president's remarks came with the country embroiled in a tense debate over how to stanch an influx of undocumented immigrants from Mexico and Central America, among them thousands of minors, who have flooded across the border into the US in recent months.

"Throughout our history, immigrants have come to our shores in wave after wave, from every corner of the globe. Every one of us -- unless we're Native American -- has an ancestor who was born somewhere else," Obama said.

And he used the event to plug his support for immigration reform, long stalled in the US Congress.

"We believe our diversity, our differences, when joined together by a common set of ideals, makes us stronger, makes us more creative, makes us different," Obama said.

"If we want to keep attracting the best and brightest from beyond our borders, we're going to have to fix our immigration system, which is broken, and pass commonsense immigration reform," the US president said.

"We shouldn't be making it harder for the best and the brightest to come here, and create jobs here, and grow our economy here. We should be making it easier."

Republican leaders will not pass immigration reform because they fear conservative activists who oppose offering a path to citizenship for 11 million undocumented migrants as amnesty, particularly in an election year.

Obama has said House of Representatives Speaker John Boehner told him last month that his chamber would not vote this year on comprehensive legislation that passed the Democratic-run Senate a year ago.

Obama said last week that he has asked the Department of Homeland Security to come up with recommendations within the next few months, which he pledged to immediately implement using his executive powers.

The immigration issue has gained new urgency after some 52,000 unaccompanied minors crossed illegally into the US via America's southern border since October.

Obama has vowed to send more resources to secure the southwestern US border, where the flood of child migrants has stretched customs services and deepened the partisan bile over immigration reform.

Obama also wants to drastically increase the number of immigration judges to the area and to do more to crack down on criminal and smuggling networks.