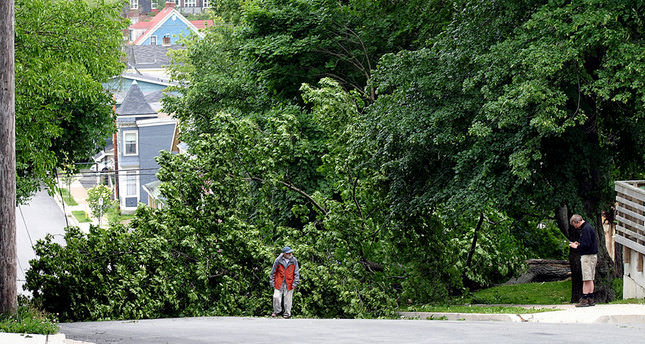 Arthur was downgraded from a hurricane to a post-tropical storm Saturday morning by the time it reached Atlantic Canada after swiping a day earlier at North Carolina's Outer Banks, but it still packed a punch.

Environment Canada measured wind gusts topping 116 kph (72 mph) in the Halifax area, while more than 12.7 centimeters (5 inches) of rain had already fallen in some areas of New Brunswick.

Nova Scotia Power said about 135,000 of its customers were without power at mid-afternoon Saturday. New Brunswick's main electrical utility reported more than 115,000 outages by mid-afternoon. It warned some residents they could be without power for up to 48 hours because of widespread damage caused by the storm.

NB Power said the largest number of outages was in Fredericton where winds of more than 100 kph (62 mph) had knocked down a number of large trees, leaving streets littered with debris.

Police in Saint John, New Brunswick, said some local roads were closed because they were covered by flood water. The storm also caused flight cancellations and delays at the region's largest airport in Halifax, Nova Scotia.

The Royal Canadian Mounted Police in Prince Edward Island said a number of electrical poles had been knocked down by the storm and roads were blocked by downed trees.

In Fredericton, New Brunswick, Mike Gange said the buffeting winds tore down a maple tree in his front yard, damaging roof tiles and a rain gutter as it fell. He said that as he drove around the New Brunswick provincial capital he saw about 25 homes with big trees knocked down.

Gange said he has not seen weather this severe in his 41 years in Fredericton.

"It's like a Tasmanian devil ripping through your backyard," he said. "It's crazy here ... at times it rains so hard you can't see 10 feet in front of you."

The Canadian Hurricane Center said the storm would end in the Maritimes overnight and then track northeast through the Gulf of St. Lawrence toward Newfoundland on Sunday.
Last Update: Jul 06, 2014 1:40 pm
RELATED TOPICS