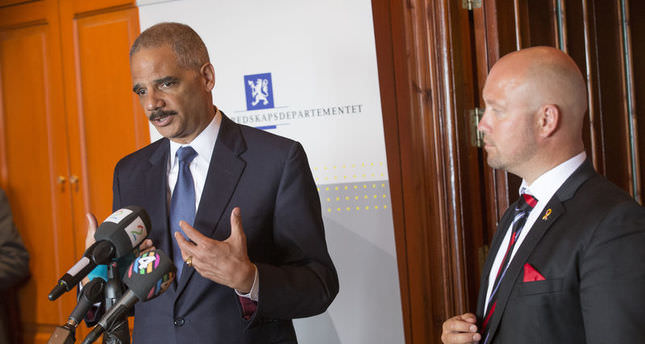 by Associated Press
Jul 08, 2014 12:00 am
U.S. Attorney General Eric Holder called on European nations Tuesday to deal more aggressively with the threat posed by the thousands of Westerners who have traveled to Syria to join the fighting there.

In a speech for Norwegian diplomats in Oslo, Holder encouraged European countries to pass laws that make it illegal to prepare for or plan an act of terrorism; to conduct undercover operations against citizens planning to visit Syria; to share information and data with the U.S. and other countries about foreign fighters; and to develop programs to counter radical extremism.

"This is a global crisis in need of a global solution. The Syrian conflict has turned that region into a cradle of violent extremism," Holder said in his speech, according to a copy of his prepared remarks. "But the world cannot simply sit back and let it become a training ground from which our nationals can return and launch attacks. And we will not."

The speech comes amid growing concerns about citizens from the United States and Europe who are traveling to Syria to join the fight against the Syrian government. U.S. officials fear those individuals, who are able to travel without visas between the United States and Europe, could easily return home radicalized and apply terrorist training received while in Syria. In May, a 22-year-old man from Florida carried out a suicide bombing mission in Syria. Intelligence officials believe there are roughly 7,000 foreign fighters in Syria, including dozens of Americans, the attorney general said.

The speech reflects the belief among U.S. officials that the threat posed by the fighting in Syria is spread among the United States and Europe.

As part of his four-part plan, Holder called on European countries to adopt statutes similar to one in the United States and, more recently, in France and Norway that make it illegal to provide support for terrorists or to plan acts of terrorism. He also said European law enforcement should follow the lead of the FBI in designing undercover operations to catch individuals before they depart for Syria.

Holder was discussing the situation in Syria in meetings this week with government officials in Norway, including Prime Minister Erna Solberg. He was also expected to talk about it during meetings in London later this week.