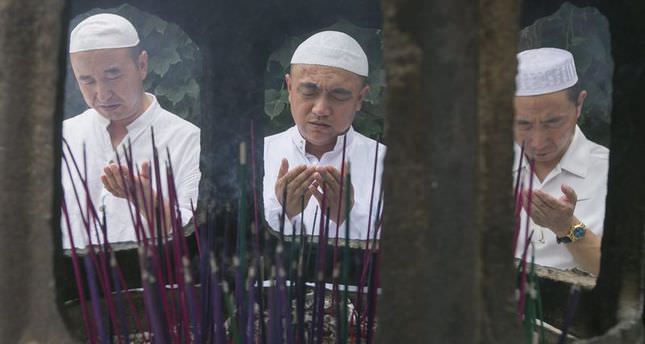 by Ragıp Soylu Jul 09, 2014 12:00 am
United States yesterday, joined the international community to condemn Chinese authorities' ban on Uighur civil servants and students from observing the Ramadan fast, amid Secretary John Kerry's four days visit to Beijing to participate in the U.S.-China Strategic and Economic Dialogue.

State Department's Spokesperson Jen Psaki raised her country's "deep" concern regarding the reports of discrimination against and restrictions on ethnic and religious minorities in China, especially during the holy month of Ramadan. "We urge Chinese authorities to take steps to reduce tensions, uphold China's international commitments to protect religious freedom and other universal human rights, observation of religion is one of them," she stated.

Amnesty International last Monday urged Secretary Kerry to ensure the human rights situation in the country and advised him to visit a Uighur Mosque during his trip. "Failing to act will send a wrong message to Chinese leadership that U.S. authorities are not concerned about this restriction." the press release added.

Local government has posted notices in China's Xinjiang province, home of Turkic Uighur people, forbidding fasting for public servants and school children. Despite the ban, Muslims in the region are still observing the month and becoming more devout in following the tradition, an Al Jazeera article said last Monday.

Amnesty emphasized that Uighurs had been the target of systematic and extensive human rights violations, including arbitrary detention, imprisonment and incommunicado detention. Chinese authorities' tight measures against Uighur people had an impact on an American scholar too. For instance, Elliot Sperling a Tibetologist at the University of Indiana, was barred entering China on arrival at Beijing airport last weekend due to his personal support of detained Uighur scholar Ilham Tohti.

Xinjiang province, also known as East Turkestan, is famous for its large deposits of oil, natural gas and coal. Historically, Uighur people have been living in the area as majority of the population for centuries, before Chinese annexation in 1949. The Chinese government launched a resettlement campaign for Hun Chinese people, thus, Uighurs turned to be a minority in the 1990's. A heavy-handed crackdown on Islamic traditions and the 1997 execution of 30 Uighurs (seeking to end the oppression by Chinese government) sparked a wave of violence in the region, which escalated further until this year.