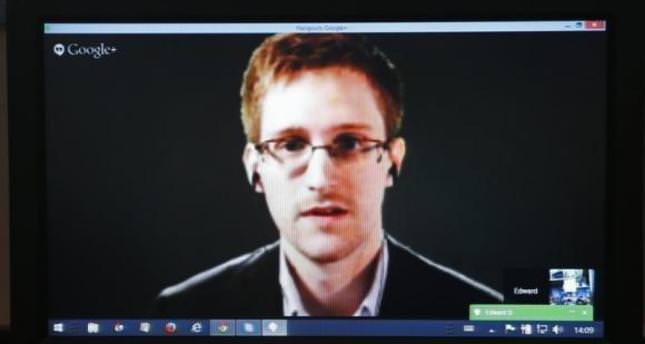 by Jul 21, 2014 12:00 am
Edward Snowden, a former U.S. spy agency contractor who leaked details of major U.S. surveillance programs, called on supporters at a hacking conference to spur development of easy-to-use technologies to subvert government surveillance programs around the globe.

Snowden, who addressed conference attendees on Saturday via video link from Moscow, said he intends to devote much of his time to promoting such technologies, including ones that allow people to communicate anonymously and encrypt their messages.

"You in this room, right now have both the means and the capability to improve the future by encoding our rights into programs and protocols by which we rely every day," he told the New York City conference, known as Hackers On Planet Earth, or HOPE.

"That is what a lot of my future work is going to be involved in," he told hundreds of hackers who crowded into an auditorium and overflow rooms to hear him speak from Moscow, where he fled to last year.

He escaped the United States after leaking documents that detailed massive U.S. surveillance programs at home and abroad - revelations that outraged some Americans and sparked protests from countries around the globe.

Snowden did not discuss the status of a request he made earlier this month to extend his Russian visa, which expires at the end of July. The United States wants Russia to send him home to face criminal charges, including espionage.

At the HOPE hacking conference, several talks detailed approaches for thwarting government surveillance, including a system known as SecureDrop that is designed to allow people to anonymously leak documents to journalists.

Attorneys with the Electronic Frontier Foundation answered questions about pending litigation with the NSA, including efforts to stop collection of phone records that were disclosed through Snowden's leaks.

Snowden is seen as a hero by a large segment of the community of hackers attending the HOPE conference, which includes computer experts, anti-surveillance activists, artists and other types of hackers.

The conference featured about 100 presentations on topics ranging from surveillance to hacking elevators and home routers.