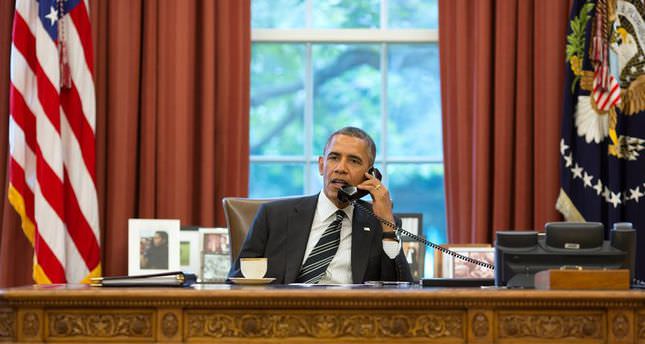 by Jul 27, 2014 12:00 am
US President Barack Obama spoke with Israeli Prime Minister Benjamin Netanyahu Sunday, and stressed the need for an immediate and sustainable ceasefire and said that any lasting solution to the Israeli-Palestinian conflict must secure the disarmament of military groups and the demilitarization of the Gaza Strip.

In a statement, the White House said Obama "made clear the strategic imperative of instituting an immediate, unconditional humanitarian ceasefire that ends hostilities now and leads to a permanent cessation of hostilities based on the November 2012 ceasefire agreement."
The call between the two leaders came as the Islamist Hamas movement fired more rockets at Israel Sunday, despite claims it had accepted a UN request for a 24-hour extension of a humanitarian truce in war-torn Gaza.

Hamas's belated acceptance of diplomatic calls for a temporary ceasefire was announced several hours after Israel resumed its devastating military assault on the Palestinian enclave after a pause of more than 24 hours.

In the call, Obama "underscored the United States' strong condemnation of Hamas' rocket and tunnel attacks against Israel and reaffirmed Israel's right to defend itself."

But the US head of state also "reiterated the United States' serious and growing concern about the rising number of Palestinian civilian deaths and the loss of Israeli lives, as well as the worsening humanitarian situation in Gaza," according to the White House.

Obama reiterated Washington's support for Egypt's initiative to ease the situation and stressed that "ultimately, any lasting solution to the Israeli-Palestinian conflict must ensure the disarmament of terrorist groups and the demilitarization of Gaza."