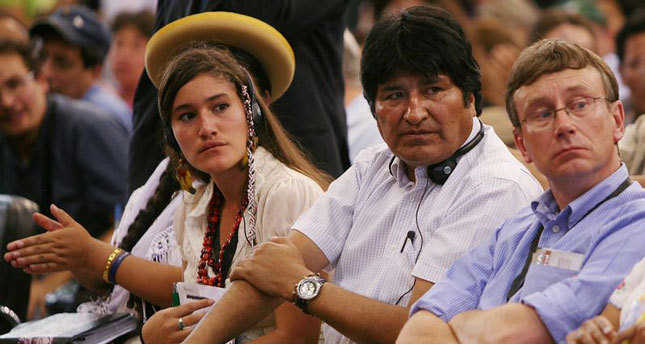 by Daily Sabah with AFP Jul 30, 2014 12:00 am
Bolivia on Wednesday renounced a visa exemption agreement with Israel in protest over its offensive in Gaza, and declared it a terrorist state.

President Evo Morales announced the move during a talk with a group of educators in the city of Cochabamba. It "means, in other words, we are declaring (Israel) a terrorist state," he said.

The treaty has allowed Israelis to travel freely to Bolivia without a visa since 1972. Morales said the Gaza offensive shows "that Israel is not a guarantor of the principles of respect for life and the elementary precepts of rights that govern the peaceful and harmonious coexistence of our international community."

More than two weeks of fighting in Gaza have left 1,300 dead and 6,000 wounded amid an intense Israeli air and ground campaign in response to missile attacks by the Palestinian resistance faction Hamas.

In the latest development, 16 people were killed after two Israeli shells slammed into a United Nations school, drawing international protests. Bolivia broke off diplomatic relations with Israel in 2009 over a previous military operation in Gaza. In mid-July, Morales filed a request with the UN High Commissioner for Human Rights to prosecute Israel for "crimes against humanity."