US court orders to seize Kurdish oil off Texas 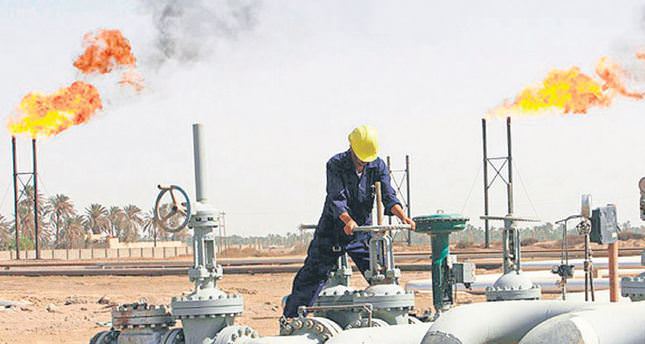 by Daily Sabah with Agencies Jul 31, 2014 12:00 am
The U.S. has barred a shipment of Kurdish crude oil from reaching the Texas coast amid concerns that independent oil sales from the Kurdistan Regional Government (KRG) could further weaken Iraq's fragile central government as it struggles to contain a military offensive by the extremist militants of the Islamic State of Iraq and al-Sham (ISIS). A U.S. district judge ordered a U.S. Marshal to seize the cargo of the United Kalavryta tanker, holding cargo of about 1 million barrels of crude oil, worth approximately $100 million, in response to a complaint filed by the Iraqi government claiming the oil was smuggled out by the KRG without its permission. However, the tanker, anchored some 60 miles off the Galveston coast, is in international waters and thus outside U.S. jurisdiction. If it moves in closer so that smaller vessels can deliver its oil to shore, the U.S. Marshal will act on the court warrant and seize the cargo from those vessels, spokesman Dave Oney said.

The United Kalavryta left a Turkish port in June carrying the crude from a newly opened pipeline that transports crude from the Kurdish oil fields. The buyer was not immediately known. As the ship approached Texas, Baghdad acted on a threat to sue anyone who buys Kurdish oil, pre-emptively filing a civil suit in U.S. District Court for the Southern District of Texas. On Tuesday, ıraqi Oil Ministry spokesman Assem Jihad welcomed the U.S. judge's seizure order. "The ıraqi government considers these oil shipments to be illegal and we hope that everybody in the world will respect our measures," he said.

To carry out the order from Magistrate Judge Nancy K. Johnson of the U.S. District Court for the Southern District of Texas, the Marshals Service may need to rely on companies that provide crude offloading services. The office of the U.S. Marshal for the southern district of Texas said it was too early to detail how the order would be upheld.

AET Offshore Services, a company in Texas that had been hired to unload the tanker for delivery to the buyer, asked in a separate court filing for a temporary restraining order so that it was not forced to handle the crude. AET said it "would be placed at considerable risk if required to lighter and take possession of the cargo before those disputes and claims of ownership are resolved. The judge's order said the vessel would be allowed free movement after the cargo is unloaded.

The Kurdistan Regional Government (KRG) said on Wednesday it had sent a letter to a U.S. court in Texas over a seized cargo of Kurdish crude oil to counter claims from Iraq's central government in Baghdad which maintains the oil was illegally exported. In the letter, the KRG asserts that Baghdad has failed to fulfil its obligations in Kurdistan, boosting the region's need to export oil as it contends with the influx of more than one million refugees in recent months due to violence sparked by Islamic State insurgents. "The federal government cannot win, because our crude is legally produced, shipped, exported, and sold in accordance with the rights of the Kurdistan Region as set forth in the Iraqi constitution," KRG Natural Resources Minister Ashti Hawrami said in a statement on the KRG's web site.

Speaking to Daily Sabah on the matter Dr. Şadi Güngör, CEO of BA Energy which operates in some oil fields in Iraq, noted that the court's ruling is only valid in Texas, which means the tanker can offload Kurdish oil in other states. "Lobbying is quite important in this situation," Güngör noted. He highlighted the dispute over the bank which would collect the oil revenue. "As it is known, U.S.-based JP Morgan wanted to collect the revenue stemmed from the sales of Kurdish oil, but the KRG authorized Turkish state-run Halkbank a few months ago. If JP Morgan was authorized by the KRG, the court wouldn't rule this way. When viewed from this aspect, the court's decision is totally political not juridical," Güngör noted. "All energy companies operating in Iraq including U.S.-based ones want to trade Kurdish oil and put pressure on the KRG to accept their conditions. The court's decision provides an argument for U.S.-based oil companies," Güngör added.

He also rebuked Turkish authorities for not taking initiative on the sale. "Turkey should not be only responsible for transferring the oil. Turkey should conduct lobbying activities in favor of the KRG to ease the oil trade if it wants to become an energy hub," Güngör noted. Dr. David Romano, an academic at Mississippi State University, who had attended the U.S. Congress Foreign Affairs Committee meeting during which the Kurdish oil issue was being discussed, noted that he inferred from the talks in the meeting that the U.S.' policy towards Iraq and the KRG would change. "The U.S. is questioning its policy towards Kurdish oil," Romano said to Anadolu Agency.

Summarizing the talks during the meeting, Romano told that the congressmen rebuked Deputy Assistant Secretary for Iraq and Iran Brett McGurk and Principal Deputy Assistant Secretary of Defense for International Security Affairs Elissa Slotkin. "Congressmen's criticisms focused on the U.S.' stance against the Kurdish oil's sale. Jeff Duncan, a congressman from South Carolina, noted that the U.S. should not let Kurdish people down whose attitudes were cooperative to America during the Iraq invasion," Romano said.
Last Update: Jul 31, 2014 1:32 am
RELATED TOPICS