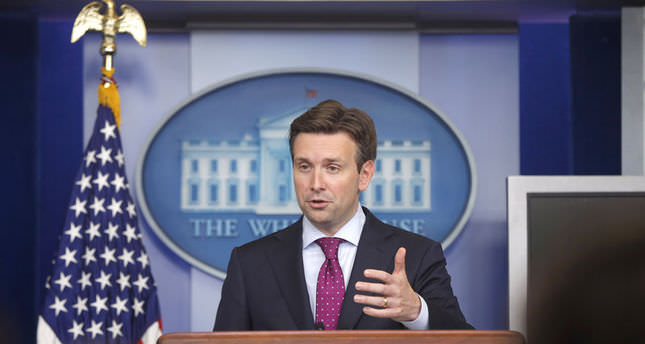 by AA Aug 01, 2014 12:00 am
There is little doubt that Israeli artillery killed 19 civilians at a UN school in Gaza, according to the White House.

"It does not appear there's a lot of doubt about whose artillery was involved in this incident," White House spokesman Josh Earnest said Thursday, pointing to UN Secretary-General Ban Ki-moon's statement that all available evidence suggested Israeli artillery as the cause.

Earnest said that the U.S. urged Israeli military officials to live up to their high standards that they had set for the protection of innocent civilians.

"The shelling of a U.N. facility that is housing innocent civilians who are fleeing violence is totally unacceptable and totally indefensible," he added.

The artillery strike on Jabalia Elementary Girls School, which was serving as a United Nations Relief and Works Agency shelter for displaced Palestinians, injured dozens.

According to the initial assessment of the UN Relief and Works Agency, it was Israeli artillery that hit the school in which 3,300 people had sought refuge, Earnest said.

A total of 84 UN facilities have been damaged since the Israeli military operation started on July 7, including schools and health centers.

More than 1,300 people have been killed in the offensive, now in its fourth week. The United Nations is hosting 140,000 displaced persons in UN facilities, including schools.