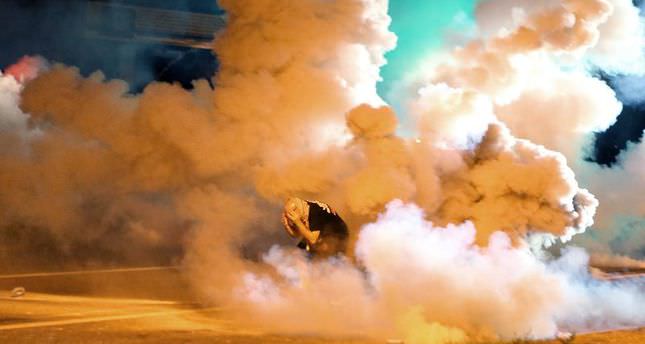 The case of the killing of an unarmed 18-year-old teen, Michael Brown, by the police in the state of Missouri has led to intensified demonstrations against the police. Many angry African-Americans took to the street to protest against the recent police shooting which is currently under investigation. As demonstrations blow up each night, Ferguson police took two journalists under custody who were reporting on the unrest, Wesley Lowery, a Washington Post political reporter, and Ryan Reilly, a Huffington Post reporter. A camera crew from Al-Jazeera America said they were shot at with rubber bullets while they were recording the protests.

"I'm emotional, but need to note: Ryan and I are fine. Have seen people in Ferguson hurt by gas/rubber bullets. This wasn't that," the Washington Post reporter tweeted. The arresting of journalists has had repercussions on social media with anger aimed at both Michael Brown's killers and the brutal police intervention. The Washington Post Executive Editor Martin D. Baron has issued a statement on the incident, saying that "there is no justification for the [Washington Post reporter] arrest."

After four straight nights, the demonstrations turned into violent confrontations between protestors and the police. Amid the ongoing violent protests, some media outlets have ignored the police brutality and the incident. CNN focuses on protests in other parts of the world like it did last year with the Gezi protests in Turkey, while often overlooking the police brutality and how weaponry is used by the U.S. police.

On the fourth night, heavily armed police in Missouri fired teargas and rubber bullets to force hundreds of protesters out of the city center to clear the area. The reports clearly show that dozens of officers carrying assault rifles, advanced with a pair of armored trucks to disperse some 350 protesters late Wednesday. The largely peaceful protest against the shooting of Michael Brown by a city policeman had started over the weekend. "I've had enough of being pushed around because of the color of my skin. I'm sick of this police brutality," an 18-year-old protester told Reuters news agency. "I'm going to keep coming back here night after night until we get justice," he said.

Along with the recent police shooting in the St. Louis suburb of Ferguson, there is a long list of people who have been brutally assaulted by police officers. According to a report released by the Centre for Research on Globalization, the number of Americans murdered by police has reached 5,000 in the last decade as of 2014, outnumbering American soldiers killed in Iraqi war, 4,489. Police in California have been investigating another incident – the repeated punching of an apparently unarmed black woman by a U.S. police officer.

This proves that the excessive police force remains a significant issue, as the police have responded to demonstrations with force to counter crowd violence. "Bottles were being thrown at them; we had Molotov cocktails being thrown; we had a police officer break an ankle from a thrown brick. So, when the assaults start coming on police officers, that's the measures that are taken," Brian Schellman, a spokesman for St Louis County police, told the Guardian.

The excessive use of force by the U.S. police is becoming a frightening reality as the number of people murdered by heavily armed police has gradually increased in the country. Taking the military equipment for local police into account, many Americans have been feeling threatened by America's militarized police force. "During the Obama administration, according to Pentagon data, police departments have received tens of thousands of machine guns; nearly 200,000 ammunition magazines; thousands of pieces of camouflage and night-vision equipment; and hundreds of silencers, armored cars and aircraft," a New York Times article released on June 8.

The American Civil Liberties Union (ACLU) issued a comprehensive report on police militarization in June titled, "War Comes Home: The Excessive Militarization of American Policing." This report demonstrates that "police militarization is a pervasive problem" due to the fact that "American policing has become unnecessarily and dangerously militarized, in large part through federal programs that have armed state and local law enforcement agencies with the weapons and tactics of war."