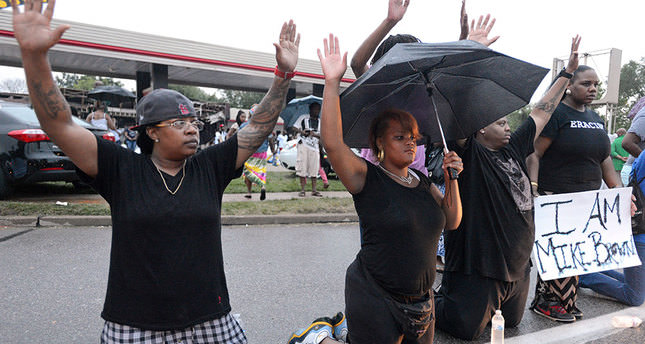 by Aug 16, 2014 12:00 am
Minutes before a police officer shot him dead, Michael Brown had become a suspect in the theft of cigars from a store, according to police reports released on Friday after days of protests in a St. Louis suburb over the unarmed black teenager's death.

But what, if anything, that had to do with the fatal encounter became less clear as the day went by. Hours after the reports' release, police said that Officer Darren Wilson, 28, had no idea 18-year-old Brown was a robbery suspect. He simply wanted Brown to move from the road to the sidewalk, Ferguson Police Chief Tom Jackson said at a news conference.

"He was walking down the middle of the street blocking traffic. That was it," Jackson said.

While Ferguson was much calmer after local law enforcement were replaced by state police led by an African-American captain, protesters said on Twitter late on Friday that police fired teargas at a crowd near a fast-food restaurant.

A Reuters witness said the smell of gas drifted through the area, and police were diverting traffic off a road that has become a major thoroughfare for demonstrators.

About 100 people assembled outside the restaurant as rain fell, and some protesters threw bottles at riot gear-clad police who ordered the crowd to disperse.

Some chanted "hands up, don't shoot", while the Reuters photographer saw some people break into two retail stores. Others who tried to enter the premises were stopped by other protesters.

After nearly a week of accusations that the Ferguson Police Department did not know how to communicate with the public, Jackson did little to dispel that image during two appearances on Friday.

He was visibly nervous, stuttering as he fumbled his notes, and made announcements that sowed more confusion. After releasing the robbery incident report without any attempt to explain its fuller context, he let more than five hours pass before confirming, and only when asked, that Wilson did not know about the robbery when he encountered Brown.

The decision by the police department, which is overwhelmingly white, to release a report on the robbery while keeping details of the shooting secret only added to the frustration felt by many in the St. Louis area.

Outside a burned-out building where protesters were shot with rubber bullets two days ago, the scene resembled a summer carnival. Horns blew in support as cars drove past a crowd of people, many of whom brought picnic coolers, and light rain didn't dampen the social atmosphere.

Hope Walker, 46, sat in a folding chair on the sidewalk with some friends. "It's more like a block party than what I was calling little Beirut," said the music teacher.

Earlier Friday, after identifying Wilson as the officer involved in the shooting, the Ferguson police chief described him as a "gentleman" who has been devastated by the incident. Wilson worked four of his six years as an officer on the Ferguson police force, Jackson said.

Wilson's identity has been kept a secret since the Aug. 9 shooting and authorities had been under mounting pressure to both identify the officer and to provide details about the investigation to ease unrest in the largely black community.

Since Saturday's killing, which took place shortly after noon on a street running through a quiet, tree-lined residential neighborhood, protesters have converged on Ferguson.

In response to demonstrations that turned violent earlier this week, U.S. President Barack Obama said he asked the Department of Justice and the FBI to investigate the killing independently.

On Friday, the agencies said in a joint statement that the probe was proceeding, confirming that agents and attorneys have interviewed multiple witnesses and would stay in the neighborhood for several more days to seek information from people who have not yet come forward.

Civil rights groups have complained that Brown's death is the latest in a long history of racial profiling and harassment by police, and discriminatory arrests.

Some residents saw the police report on the robbery as the latest example of the pattern.

"This is how the police operate here, they always defame the name of the victim," said area resident Arthur Austin, 39. "The more I hear, the less I trust what the police are saying."

A Brown family attorney said it appeared to be Brown in the convenience store's security-camera footage, which showed a man shoving a store clerk during an apparent robbery. Dorian Johnson, the friend who was with Brown that day, told the FBI and Justice Department officials about the robbery this week, his lawyer said.

Anthony Gray, a Brown family attorney, said the talk of a robbery was a "distraction" raised by police. He said the real issue was why Wilson shot an unarmed Brown as the teenager held his arms in the air in a sign of surrender, as two witnesses described.

The Rev. Al Sharpton, president of the civil rights group National Action Network, issued a statement condemning what he called a "smear campaign" against the teenager.