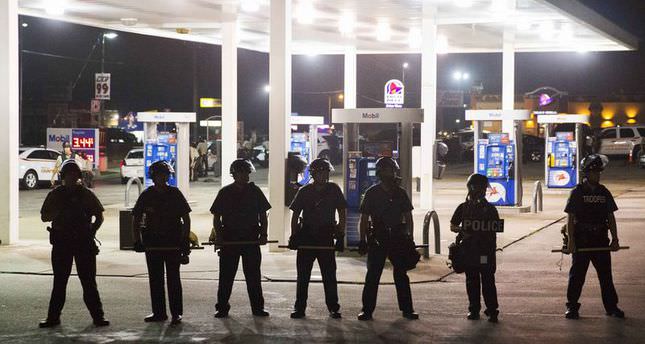 by AA Aug 18, 2014 12:00 am
The fatal shooting last week of an 18-year-old black man named Michael Brown by a police officer in Ferguson, Missouri, fueled protests among the residents of city, which is predominantly populated by African-Americans.

But the protesters in Ferguson who held banners saying "Justice for Mike" and shouted "Peaceful protests!" were faced with a heavily militarized police force, dressed in camouflage, firing tear gas from tanks and targeting protesters with rubber bullets.

The police crackdown on protesters in Ferguson, a suburb of St. Louis, raises concerns over the militarization of American police forces, which are now equipped with gear that was once used by the U.S. Army in Afghanistan and Iraq, according to analysts.

On June 23, the American Civil Union Liberties published a report entitled, "War Comes Home: The Excessive Militarization of American Policing." The report says S.W.A.T. teams frequently raid people's homes across the country in the middle of the night, often to search for drugs.

Although people have been killed during the raids and pets have been shot dead, ''billions of dollars worth of military equipment flows from the federal government to state and local police departments," the report says.

The equipping of police departments with military gear formerly used in war zones dates to 1990 when the 110th Congress enacted the National Defense Authorization Act, which paved the way for the Department of Defense Excess Property Program, also called the 1033 Program.

According to the Defense Logistics Agency, which provides logistic support and military services, the equipment provided to civilian law enforcement agencies in 2013 alone was worth half a billion dollars. This equipment includes: aircraft, watercraft, armored vehicles, highly-mobile multi-wheeled vehicles (HMMWV), and armored personnel carriers designed for battlefields.

But as local police departments increased their weaponry with surplus military equipment, the population living in poverty in Ferguson doubled between 2000 and 2010-2012, according to the Brookings Institute. By the end of this period, roughly one in four residents lived below the poverty line.

Sean Arseo, a political scientist and classroom assistant at the Charter School of San Diego, told The Anadolu Agency that poor areas in the U.S. are also highly policed areas.

"Citizens of those communities face an overwhelming fear that any confrontation can erupt into their wanton slaying or brutal beating by an officer for any minor perceived offense," Arseo said. "Those who come out in opposition to these unnecessary tragedies are met with an equally, if not more, brutal response."

The Missouri Attorney General's Office has released statistics that show that racial profiling was prevalent in Ferguson before the recent tension. According to the report, police stopped 4,500 African-Americans in 2013 compared to 686 white citizens the same year.

"For generations now it seems clear that blacks are on average and as a class treated significantly more harshly than whites by law enforcement," Angelo Corlett, author and professor in Philosophy of Law at San Diego State University told The Anadolu Agency. "To the extent that this is true, it must be stopped as soon as possible and permanently."

Ferguson Police Department's response to the protesters also raises concerns of constitutional rights being put at risk, according to analysts. The First Amendment of the U.S. Constitution prohibits the enactment of any law "abridging the freedom of speech" and the right of people to peacefully assemble.

"Police officers must be careful not to violate the First Amendment to the U.S. Constitution upholding nonviolent freedom of expression -- even passionate and offensive expression," Corlett said.

"It is very important for a group to be heard in peace and with respect," Corlett said. "Sometimes meeting frustrated protesters with great presence is not the right thing to do and can make matters worse."