Curfew declared as unabated clashes continue in Missouri, US 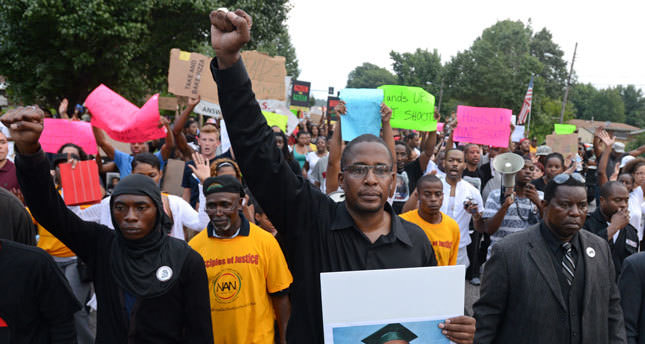 Tension remains high in Ferguson, as protestors refuse to clear the area despite police warnings after an enforced curfew came into effect midnight Sunday

After a state of emergency erupted in the suburban St. Louis community of Missouri on Sunday midnight, there has been no ease of tension in the troubled streets of Ferguson as many angry protesters refuse to leave the streets. Under a downpour of rain some chanted, "No justice, no curfew, no peace." A week-long demonstration turned into violent confrontations between protestors and local police. Before firing smoke bombs, police warned the remaining demonstrators that they would be arrested unless they clear the area. The violent clashes between heavily armed Ferguson police and protesters of the local town have been continuing unabated.

The U.S. police, who were equipped in riot gear, reportedly fired smoke canisters at protestors who would not move from the street early on Sunday. The Ferguson police reported that after the police warning people to clear the streets, the number of protesters remaining in the street was still around 150. Missouri Governor Jay Nixon declared a state of emergency that ran from Sunday midnight until 5 a.m. local time, after a week of protests over the fatal shooting of 18-yearold Michael Brown in the suburban St. Louis community.

"The eyes of the world are watching. This is the test of whether a community, this community, any community, can break the cycle of fear, distrust and violence, and replace it with peace, strength and, ultimately, justice," Governor Nixon also said. "The curfew is going to make things worse," 24 year-old protester Phonso Scott told Reuters news agency. "I think the cops are going to get violent tonight, but they can't lock us all up."

The arrests and tear-gassing of journalists during the demonstrations have had repercussions in the international media. Wesley Lowery, a Washington Post political reporter, and Ryan Reilly, a Huffington Post reporter were arrested by Ferguson police on Wednesday. After long hours of detention, they were released the same night they were taken into custody. The other journalists were hit and teargased while covering the unrest by the Ferguson police outfitted in SWAT gear. A camera crew from Al-Jazeera America said they were shot by rubber bullets, while they were recording the protests.

The case of the killing of unarmed 18-year-old Michael Brown by the police in the state of Missouri has led to intensified demonstrations against the police, as many angry African-Americans took to the street to protest the recent police shooting which is currently under investigation. A series of demonstrations erupted after the police officer Darren Wilson, 28, shot and killed Michael Brown on a street in Ferguson on Aug. 9. The largely peaceful protest against the shooting of Michael Brown by a city policeman started on the weekend. The reports clearly show that dozens of police officers carrying assault rifles, advanced with a pair of armored trucks to disperse some 350 protesters late Wednesday.
Last Update: Aug 18, 2014 1:51 am
RELATED TOPICS