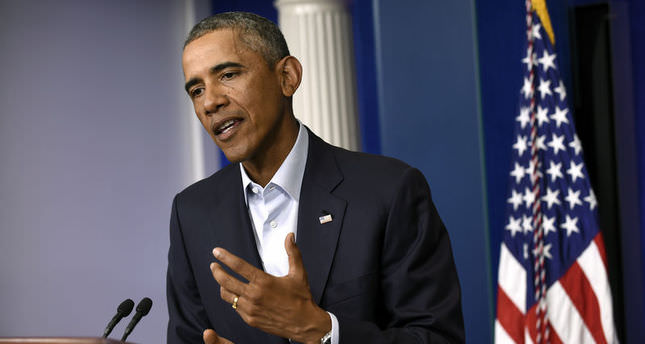 by Daily Sabah Aug 19, 2014 12:00 am
U.S. President Barack Obama confirmed that Iraqi security forces and Kurdish peshmerga forces recaptured the Mosul dam from Islamic State of Iraq and al-Sham (ISIS) militants. "If we have effective partners on the ground, mission creep is less likely," Obama said in a brief press conference Monday afternoon. He praised the Iraqis and Kurds for recapturing the dam, described the recapture as a "major step" toward removing ISIS and said, "We continue to see important progress across different parts of our strategy." Providing his second declaration of something close to victory since Thursday when he declared ISIS's siege of Sinjar Mountain to be broken, he said "If that dam was breached, it could have proven catastrophic." As a response to U.S. airstrikes, ISIS declared in a video statement that the U.S. has become one of its main targets and the militants will target Americans everywhere.

Following the recapture of the dam, the Iraqi army announced that a major offensive was launched against ISIS militants in Tikrit, which is among the cities captured by ISIS two months ago. "Our forces are advancing from two directions with cover from army helicopters and mortar and artillery shelling the positions of the ISIS fighters in and around the city," an army major in the operations room told Reuters. The Iraqi army said the helicopters are pounding ISIS bases and trying to prevent them from regrouping.

The U.K.-based Daily Mirror newspaper on Monday claimed that a crack unit was formed by the U.S. to hunt the ISIS leader Abu Bakr al-Baghdadi. "Around 100 CIA spooks and special forces are hunting for 42-year-old Abu Bakr al-Baghdadi, dubbed The Ghost because he leaves no trace despite running an army of followers. It is the biggest counterterror search since the Americans tracked down and killed al-Qaida mastermind Osama bin Laden in 2011. Using unmanned spy planes, other aircraft and satellite imagery, intelligence experts are gathering mobile phone call data and movements on the ground in Iraq and Syria," the newspaper said. "Al-Baghdadi is elusive but he will be found eventually. His forces are stretched so phone calls will be made, that will be his weak point," a source told the newspaper.

Meanwhile, the United Nations High Commissioner for Refugees (UNHCR) said on Tuesday it was launching a major aid operation to get supplies to more than half a million people displaced by fighting in northern Iraq.

A four-day airlift of tents and other goods will begin on Wednesday to Irbil, Iraq from Aqaba in Jordan, followed by road convoys from Turkey and Jordan and sea shipments from Dubai via Iran over the next 10 days, UNHCR spokesman Adrian Edwards said. "This is a very, very significant aid push and certainly one of the largest I can recall in quite a while," Edwards told a news briefing in Geneva. "This is a major humanitarian crisis and disaster. It continues to affect many people."