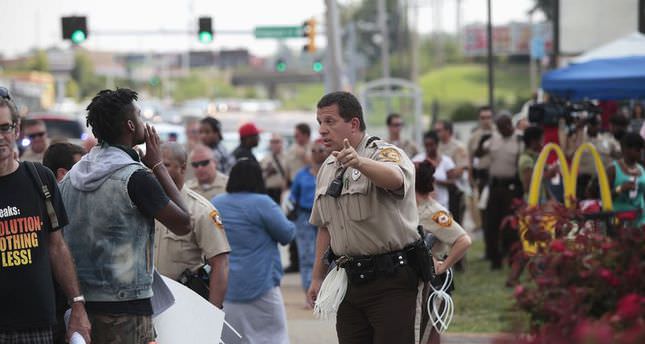 by Associated Press Aug 19, 2014 12:00 am
Two protestors have been shot and 31 have been arrested by police in Ferguson, a day after the Missouri governor summoned the National Guard to help restore calm to the St. Louis suburb where Michael Brown was fatally shot by a police officer.

The latest clashes came at the end of a day in which a pathologist hired by the Brown family said the unarmed 18-year-old suffered a bullet wound to his right arm that may indicate his hands were up or his back was turned. But the pathologist said the team that examined Brown cannot be sure yet exactly how the wounds were inflicted until they have more information.

An independent autopsy determined that Michael Brown was shot at least six times, including twice in the head, the family's lawyers and hired pathologists said.

Witnesses have said Brown's hands were above his head when he was repeatedly shot by an officer Aug. 9 in Ferguson.

Protesters filled the streets after nightfall, and officers used bullhorns to order them to disperse. Police deployed noisemakers and armored vehicles to push demonstrators back. During one confrontation, officers fired tear gas and flash grenades. There were no reports of serious injuries.

After the streets had been mostly cleared, authorities ordered reporters to leave as well, citing the risk from gunfire that had been reported.

Crowd control remained the responsibility of police, with most of the National Guard units that had been summoned by Gov. Jay Nixon keeping their distance from the protests and protecting a police staging area.

In Washington, President Barack Obama said the vast majority of protesters in Ferguson were peaceful, but warned that a small minority was undermining justice.

During a brief pause in his summer vacation, Obama said overcoming the mistrust endemic between many communities and their local police would require Americans to "listen and not just shout."

The president also weighed in for the first time publicly on the militarization of some local police departments, saying it would probably be useful to examine how federal grant dollars had been used to allow local police to purchase military-style equipment.

Attorney General Eric Holder was scheduled to travel to Ferguson later this week to meet with FBI and other officials carrying out an independent federal investigation into Brown's death.

Obama said he also spoke to Nixon about his deployment of the National Guard in Ferguson and urged the governor to ensure the Guard was used in a limited way.

Forensic pathologist Shawn Parcells, who assisted former New York City chief medical examiner Dr. Michael Baden during the private autopsy, said a bullet grazed Brown's right arm. He said the wound indicates Brown may have had his back to the shooter, or he could have been facing the shooter with his hands above his head or in a defensive position across his chest or face.

"We don't know," Parcells said. "We still have to look at the other (elements) of this investigation before we start piecing things together."

A third and final autopsy was performed Monday for the Justice Department by one of the military's most experienced medical examiners, Holder said.

Also Monday, Nixon lifted the neighborhood's midnight-to-5 a.m. curfew two days after it went into effect when he declared a state of emergency.

Nixon said the National Guard troops would be under the direction of the Missouri State Highway Patrol, which is overseeing security during protests.

Police told protesters Monday that they could not assemble in a single spot, saying they had to keep moving. In federal court, a judge denied a request from the American Civil Liberties Union for a restraining order that would have prevented authorities from enforcing the rule.

Two men were arrested for disorderly conduct and failure to disperse, police said. A photographer for the Getty photo agency was arrested while covering the demonstrations and later released.

Authorities were also establishing a designated protest zone for nightly demonstrations. The plan was announced Monday by St. Louis County police. It was not clear what would happen to those who refuse to use the area along the avenue where the majority of protests have occurred.

The St. Louis County medical examiner's autopsy found that Brown was shot six to eight times in the head and chest, office administrator Suzanne McCune said Monday. But she declined further comment, saying the full findings were not expected for about two weeks.

Family attorney Benjamin Crump said Brown's parents wanted the additional autopsy because they feared results of the county's examination could be biased. Crump declined to release copies of the report.

"They could not trust what was going to be put in the reports about the tragic execution of their child," he said during Monday's news conference with Parcells and Baden, who has testified in several high-profile cases, including the O.J. Simpson murder trial.

The second autopsy, Crump said, "verifies that the witness accounts were true: that he was shot multiple times."

Baden said one of the bullets entered the top of Brown's skull, suggesting his head was bent forward when he suffered that fatal injury. The hired pathologists said Brown, who also was shot four times in the right arm, could have survived the other bullet wounds.

Baden also said there was no gunpowder residue on Brown's body, indicating he was not shot at close range. However, Baden said he did not have access to Brown's clothing, and that it was possible the residue could be on the clothing.

Crump also noted that Brown had abrasions on his face from where he fell to the ground, but there was "otherwise no evidence of a struggle."