Protestors demonstrate against CNN in Atlanta 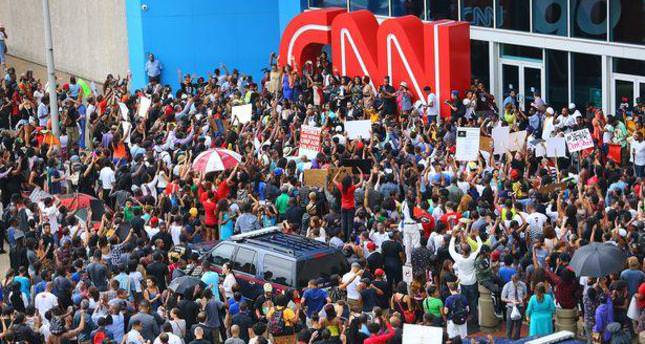 by Daily Sabah with Agencies Aug 19, 2014 12:00 am
Thousands of protestors have recently marched to the headquarters of US-based news channel CNN to demonstrate against the channel's insensitivity towards the killing of 18 year old Michael Brown in Ferguson by a police officer.

The channel has been accused of turning a blind eye to the conflict that is currently taking place in Ferguson, Missouri where racial tensions have reached their peak and people have taken to the streets to protest. The US National Guard were deployed to suppress the protests when people refused to obey the curfew imposed by officials. The broadcasting of irrelevant news and a documentary about killer whales at the peak of the protests broke the camel's back as many people reacted to the channel's stance and took it to their headquarters in Atlanta. They criticized CNN for failing to portray Brown's story and the protests in Ferguson.

CNN is also criticized for failing to cover the police violence in Ferguson where tear gas is widely used and over 30 people have been arrested, while journalists and reporters have been a target of tear gas canisters and were taken under custody. However, CNN had provided provocative and biased 24-hour coverage of Gezi Park incidents in Turkey last year, where they focused on and exploited actions of the police while refusing to cover the violence of protestors who looted shops, and disturbed the public.