US faces another escalation of violence after second fatal police shooting 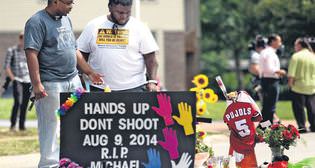 Ferguson police shot dead a second black man, spreading violence in the riot-struck U.S. city of Ferguson, Missouri. The police arrested, beated and detained a Turkish journalist, for more than five hours in a cell

After days of clashes over the police shooting of unarmed 18-year-old Michael Brown, public anger in the U.S. has steadily increased as a Ferguson police officer shot and killed another black man on the suspicion of carrying a knife and "behaving erratically." The latest incident further inflamed the ongoing tensions, as the angry crowd gathered outside the convenience store where the 23-year-old was shot dead by police. The streets of Ferguson were relatively calm on Tuesday after Monday night's running battles.

Many protesters marched peacefully on Tuesday night, reports said. The city of Ferguson issued a "nighttime quiet and reconciliation," however, the tensions were not settled as many fear that the latest police shooting will exacerbate the ongoing turmoil. The heavy clashes have escalated after the lifting of curfew on Monday, resulting in at least 78 arrests on Monday night, said Ferguson police. Missouri Highway Patrol Captain Ron Johnson told DPA news agency that "protesters had fired guns and thrown rocks, bottles and firecrackers at police" during Monday's night riots.

Bilgin Şaşmaz, an Anadolu Agency photojournalist was threatened, badly beaten and arrested by police in Ferguson while trying to capture the protests following the killing of 18 year-old unarmed Michael Brown amidst a racial tension. Şaşmaz was at the scene of the protests when he was violently arrested by the police who threatened to kill him if he did not stop taking photos of a police shooting rubber bullets on protestors. The photojournalist refused and continued to capture photos and the police handcuffed him. He was put into a cell for five hours without questioning.

According to Şaşmaz, the protests heated up when demonstrators threw bottles at the police, which retaliated by shooting rubber bullets. "The police held me and threw me on the ground" said Şaşmaz, who noted that his clothes and camera made it evident that he was a journalist. Moreover, he stated that he yelled press to let them know that he was a journalist but the police refused to listen and about three policemen mistreated him as he was lying down on the ground, while his camera and equipment were damaged.

Meanwhile, a grand jury began a criminal inquiry into the police shooting of Michael Brown on Wednesday, said a representative from the St. Louis County prosecutor's office. The U.S. justice department will also conduct investigations into the case. However, many people do not harbor confidence for a fair investigation into the case of Michael Brown, as the recent poll conducted by Pew Research center found, surveying 1,000 adults to analyze the U.S. public reaction to the shooting.

The survey finds that the majority of Americans, 40 percent of whites and 65 percent of blacks, think that the local police went too far in the aftermath of Michael Brown's death, despite the divided opinions between black and white Americans. The confidence in the investigations into the police shooting also reflects that public reaction has fallen sharply along divided lines. According to the poll, whites are more likely than blacks to have a fair amount of confidence in the investigation, and 76 percent of blacks believe that the investigation will be held unfairly.
Last Update: Aug 21, 2014 12:52 pm
RELATED TOPICS